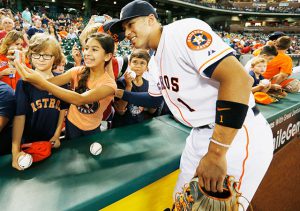 Lots of people say the key to our success this year has been all the veteran leadership we’re getting. I also hear people talk a lot about the confidence we gained from a great start to the season.

And I can see that. Those things are definitely important. But I want to make a case for the fog machine.

We’ve got this fog machine in the clubhouse, and it’s pretty much the greatest thing ever.

When we get a big win in front of our fans at Minute Maid Park, it’s the best feeling in the world for us because everyone on the team knows what’s coming next.

We shut off all the lights, and get some music going, and then….

We’ll hit the button on that thing and turn on these club lights we got, and then all of a sudden you look around and see the pitchers are all dancing, and the position players are going nuts.

It gets loud in there. It’s mostly hip-hop, and Latin music, and reggaeton, but we throw some country in there, too. I’m always requesting Kendrick Lamar, but there’s lots of Migos and Daddy Yankee and Ozuna. It’s a good mix.

And people don’t hold back. No one is judging you or looking to see if you dance right. It’s just a big party.

Here’s how I would describe it: Just imagine a nightclub, but without the drinks. (Well, I mean, there are drinks. You can still get something to drink. But it’s just Gatorade and water.) And at this club you actually like everyone in there. Everyone is one of your friends.

We all love those fog machine nights. They’ve brought us closer together as a team, and they’ve been a big part of why this season has been the most fun I’ve ever had playing baseball.

Sure, Altuve should be named the league’s Most Valuable Player, but Fog Machine might just be the team MVP.

And speaking of Altuve….

Let me take a second here to tell you a story that says all you need to know about that guy.

So it’s pretty early in the season, sometime in May, and we’re playing in Minnesota. José comes up to me and Marwin González. He wants to talk. I’m hitting like .311 at the time. Marwin’s also at .311, and José’s sitting at .308. So we’re all kind of in the same range.

Well, José’s got an idea.

He says we should all agree that whoever gets to .320 first, the other two will have to buy that person something. Like I don’t know, I think he said a nice pair of shoes or a dress shirt.

So he has the whole idea all planned out in his head, and he’s selling it to us … like exactly how it will all work.

And the entire time, as he’s talking, Marwin and I are just looking back and forth at each other like, What’s happening here?

When he finally stops talking, I speak up right away.

“I’m not making any bet like that with you! Are you kidding me?”

Marwin is just shaking his head from side to side at this point.

And Altuve’s like, “Come on! Why not? It will be fun. And you guys already have a head start.”

So I calmly tell José that I’ve never hit .320 in the majors, and point out that he’s someone who has hit over .330 multiple times in the big leagues.

Marwin agrees, and José just kind of makes a face, and then we all go about our business.

The next day, we all show up at the ballpark and Altuve goes out and gets four hits. One. Two. Three. Four. Four hits. Like it was nothing.

And just like that, his average was at .320! The very next day after he wanted us to make that bet.

Me and Marwin, we knew what was up, though. We’re not suckers. We weren’t going for it. After the game we both went up to him and were just like, Do you think we don’t know who you are or something?

José just smiled at us and walked off to take some cuts in the cage or something.

In all seriousness, what that fog machine, and the dance parties, and that crazy Altuve story all symbolize for me is the togetherness and closeness of this year’s team. I really do believe that one of the big reasons we’ve been so successful is that we’re all so tight. It’s not one of those things where everyone kind of stays to themselves, or some guys form little groups off to the side. We all hang out together, and play FIFA on the PS4 in the clubhouse before our games, and joke around, and play pranks, and talk smack. (“The 2017 Astros FIFA champion of the world: Carlos Correa … by a mile!”)

We have the perfect mix of fun times and focused preparation.

Here’s the thing, though, and this is super important: We’re not all jokes.

We know when it’s time to get serious, and we know what it takes to prepare day in and day out to play winning baseball. I truly believe that what makes our team special is that we have the perfect mix of fun times and focused preparation.

There are so many guys providing leadership for us right now, but, for me, everything comes back to Carlos Beltrán. In my opinion, that guy is the most respected player in all of baseball, bar none. He’s a 20-year veteran, and he’s just filled with wisdom. When he talks to anyone — anyone! — they listen. And it doesn’t matter if he goes 0 for 4 or 4 for 4, he’s going to find ways to help the team.

Carlos has taught me so many things, not just about baseball, but also just about life. We always go out to eat together when we’re on the road, and after every one of those meals, when I’m going to sleep that night, I realize that I’ve learned like 10 new things. At least.

I love that guy, and he’s become the heart and soul of this team.

Then when you can not only add Carlos to your ball club, but also players like Brian McCann — who really is the best teammate you could ever imagine — and Charlie Morton and Josh Reddick, and then to add a Cy Young-type pitcher here recently in Justin Verlander … there’s just been a huge increase in terms of veteran leadership as compared to last year.

And, to be honest with you, we’ve needed some strong guys to lean on this season … especially after Harvey rolled through.

We were in awe of how this city responded after the storm, and the strength of this Astros ball club is inspired by that same attitude.

These past six weeks have been such an emotional time.

We were on the road when the storm hit, and I was actually in Fresno doing my rehab when Harvey made landfall. So me and my teammates had to watch everything happen on TV knowing that so many of our friends and family members and wives and children were back home facing down those winds.

And for me, sitting there in a hotel room watching all the destruction, and the flooding, and the suffering, and seeing all the posts popping up on Twitter … it was just very difficult to be so far away and to try and wrap my head around what was going on. I was just so very sad. (And for me and Carlos and Juan Centeno, it’s unfortunately a deep sadness that we’d experience again when Hurricane Maria devastated our native Puerto Rico.)

I couldn’t wait to get back to Houston to meet with people, and to give them hugs, and to help out as best I could. And I’ll never forget that first series when we returned home after the storm.

We all got together in the clubhouse beforehand and talked about how we wanted to do everything we possibly could to bring some joy to the people of Houston. And when we got out on the field, we felt the love in return. It really went both ways.

We played some of our best ball during that first series back, and as those games were happening, I can tell you that I noticed so many more little things in the stands — the smiles on people’s faces when we got a big hit, how happy little kids were to see us, or people calling out our names and just shouting encouragement. All that stuff touched me even more after the storm, and it really showed me, once again, just how special the people of this city are.

At this point, it really feels like we’re all just doing the best we can to lift one another up at the same time.

And now, right in the middle of all of that … it’s playoff time.

We all know what these next few weeks are going to mean to this town.

And all of us — José, Marwin, Carlos, McCann, Keuchel, Reddick, Springer … all the guys I beat at FIFA … everyone — we’re all ready to make something special happen for the city of Houston.

I can’t wait to get going, that’s for sure. These playoffs, and coming through for this town, are all I’ve been thinking about recently.

I’ve seen the true heart of this place — the spirit and the kindness and the optimism of this city that I am so proud to call my home.

I live here, and so do my parents and many of my closest friends. I love this city with all my heart. Over the past few years, Houston has become my home. And to see this city, our city, go through what it has during the past six weeks has been extremely difficult. To see people — good people, caring people, your neighbors and mine — losing everything, that has been heartbreaking.

But, at the same time, I’ve also seen the true heart of this place. I’ve seen the spirit and the kindness and the optimism of this city that I am so proud to call my home. And I’m more convinced than ever that, together, we’re going to come back from this tragedy even stronger and more unified.

After the hurricane gave us its best shot, we proved that we are stronger than any storm and that we’re at our very best when we all work toward a common goal.

Everyone here joined together to form one big team, and it has been truly amazing. My teammates and I were in awe of how this city responded after the storm, and the strength of this Astros ball club is inspired by that same attitude. We work hard and support one another and overcome any challenges in our path … together.

And, I can tell you this much, if we’re able to accomplish what I think we can over these next few weeks, and bring the first World Series title to this great city of ours, the celebration is going to be one for the history books.

Then, years and years later, we’ll all be able to tell our grandkids about the incredible playoff run that was part of a year when Houston showed the whole country — the whole world, really — just how tough the people of this city really are.