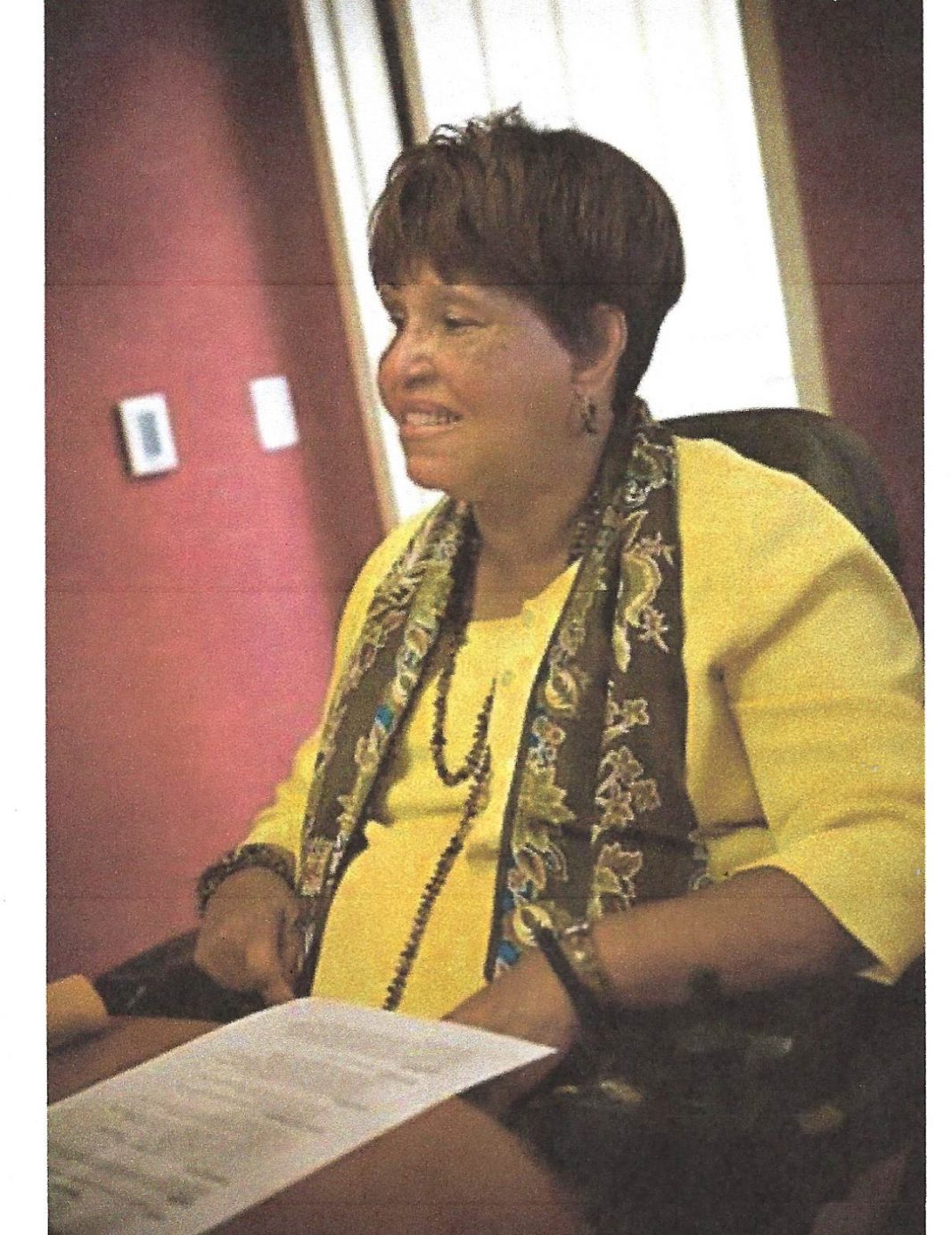 By The Oklahoma Eagle Newswire

Mrs. Mable Izona Rogers-Rice, the youngest of seven, was born on December 31, 1933 to Robert and Lucy Rogers; she died on October 6, 2017. She was residing in Tulsa at the time of her death. Memorial services will be Saturday October 14, 2017, 11:00 a.m. at Metropolitan Baptist Church 1228 West Apache Street, with Pastor Ray Owens, eulogist.

In lieu of flowers, please make your donation to the Greenwood Cultural Center, 322 North Greenwood, Tulsa, Oklahoma 74120. Your gift will be matched by the ONEOK Foundation.

Mable graduated from Booker T. Washington High School in 1951. In 1952, Mable married her high school sweetheart, Troy Rice. To this union, Karen, Denise, and Gina were born. Mable and Troy were married for 64 years. They were the perfect example of opposites attract, but their commonality was shared in their love for family and community.

Mable was preceded in death by her husband, Troy, her parents, her sisters Opal, Beulah and Flossie and her brothers Robert Jr., Lee Daniel and Johnny.

Mable was a true pioneer, activist, leader, and a devoted crusader for Tulsa. She taught many how to love, laugh, work hard, and champion the African-American experience while always sharing her sweet smile and gentle “can-do” spirit. She was the epitome of a life well lived.

Mable was always ahead of her time—from the work she did impacting the lives of others in the City and State, to the business she owned, to the fashions she wore—she was a trailblazer in every sense of the word!

Mable would often take the girls with her to meetings, galas, and other events, demonstrating her commitment to excellence and servitude. Mable loved her daughters unconditionally throughout their lives. She was proud to see the values she had instilled in them as they grew up and began to have families of their own. Mable and Troy would beam with pride at the mere presence of their three grandsons and great-grandchildren. Another area of common ground was their pride for the Tulsa north community. They genuinely cared about any accomplishments or developments that made this area of the City a better and more cohesive place to live.

To know Mable was to love her. Her life’s work proved she had a servant’s heart. She also had a presence that could light up any room. And it didn’t matter how crowded the room was, she could make you feel like you were the only person who mattered. She believed everyone had a story and she genuinely wanted to know the person behind that story.

Mable had a way of making everyone feel special. She was always proud of anyone doing positive things and bragged on others every chance she could get. So much so, her children would jokingly ask, “What about us?” This was once again a testament that she didn’t show any favoritism; she was proud of everyone, including her own children. In fact, she put together dozens of scrapbooks with newspaper clippings highlighting the good news and works of others. The day after she passed, her daughters found a stack of freshly folded newspapers with articles that she planned to put together, just as she had always done. It was her special way of honoring the accomplishments of others.

Mable loved music and loved to dance! She was a majorette in school. She would share the story of how she almost didn’t make the team because she couldn’t do the splits. In  her true Mable “can-do” spirit, she suggested that she do a cartwheel instead, and that’s how she entered every performance! Her love for dance left her daughters with some great memories, as well. She would grab a vacuum and use it as her dance partner, while watching dance shows like, “America Bandstand.” Music and good times constantly filled Mable and Troy’s home. There were always Christmas parties, neighborhood gatherings, and family, friends, and classmates visiting. She loved to welcome others into their home to have a good time.

In the early years, Mable was a member of the Prince of Peace Lutheran Church. Later in life, she joined the Church of the Restoration Unitarian Universalist. Once she moved to the Saint Simeon’s Senior Community, she faithfully watched Metropolitan Baptist Church’s livestream of the Sunday morning service. She enjoyed hearing a word from the Lord from Pastor Ray A. Owens. It was also important to her to take communion regularly. Mable had a God-loving spirit, and her true ministry was inspiring and moving our community forward. She devoted her life’s work to making a huge impact on the city of Tulsa. She never stopped instilling a sense of pride for the Tulsa north community she so deeply loved and appreciated.

Mable’s list of accomplishments are many—from her tireless service for various organizations to her career filled with years of devoted work in her beloved community. In the early years of her career, she worked as a Home Health Counselor at Moton Comprehensive Health Center. She then became a Recruiter for Guidance for Integration Program.

In the early 1960s, Mable hit her stride as an advocate in the Tulsa north community. This is when she became the Associate Director of the Urban League. She was charged daily  with the task of assisting the Executive Director in conceptualizing and implementing the dozens of programs that were under the Urban League’s umbrella. In the 1970s, because of her remarkable work with the Urban League, she was nationally recognized and recruited by the lead office in New York to be the first person to run a local chapter of the Minority Women Employment Program (MWEP).

While working as the Project Director for MWEP, she proudly broke down barriers where minority women had not been hired at managerial levels. It was a demanding position that required her to be ready to fill in for others at a moment’s notice and often travel to one of the many states where the program was operating. As always, she was not only up for the challenge, but she met it head-on and took it all in stride. In her true pioneer spirit, Mable was the first and only black business owner inside Connolly’s Department Store, located at the Forum in downtown Tulsa.

Mable loved fashion, and it was evident as she always inspired others with her sense of style. Anyone that knew Mable marveled at her unmatched work ethic and willingness to boldly tackle new and difficult projects and causes. Another great example of her “can-do” attitude was when she agreed to become the founding Executive Director of the Oklahoma Chapter of the National Association of Sickle Cell Disease in 1983. She served the association in that capacity for over 12 years. Mable’s passion to raise awareness, funding, and support for the fight against Sickle Cell stemmed from watching her sister-in-law suffer from the disease.

Mable organized citywide blood drives, hosted the association’s national in Tulsa, and lectured throughout the City and State about the daily challenges of those living with Sickle Cell.

Working with her dear friend, former Senator Maxine Horner, she secured the passage of legislation requiring babies to be tested at birth for the sometimes-deadly disease. Soon after the legislation was passed, Mable’s daughter Gina gave birth to a son, and because of the testing, Gina was informed that he had the Sickle Cell trait. Mable retired from the association in 1995.

Many of her initiatives and programs continue to be essential to the association’s work, including the Sickle Cell 5k Run. Mable’s involvement in the community spans decades. Highlights of her work include the North Tulsa Heritage Foundation, where she joined efforts to save the Mabel B. Little Heritage House located in the Historic Greenwood District. She was also one of the original board members of the Oklahoma Jazz Hall of Fame and was instrumental in the creation of the Greenwood Cultural Center. Other accomplishments include: Founding member of Simon Estes Educational Foundation, Member of National Conference of Christians and Jews, Advisory Board at St. John’s Hospital, Star Community Mental Health, Inc., Mayor’s Appointee to Tulsa Arts Commission, Business and Industrial Development Corporation, Performing Arts Center Authority.

Growing up, there was always music in Mable’s home. Her father and brothers were musicians, which sparked her love of music. She also truly loved the arts. During the Civil Rights era, she took a trip to California and witnessed different races connecting through art and music. Inspired by what she saw and knowing the world-class talent that existed throughout Tulsa’s African-American community, she started Tulsa’s first Black Arts Festival in the 1960s. The Festival, a weeklong celebration that occurred each year around Juneteenth on Greenwood Avenue, featured world-renowned artists displaying their artwork, a gospel music brunch, national recording artists, and a Miss Black Arts Festival Pageant. The Black Arts Festival eventually inspired the annual Juneteenth celebration for Tulsa. Even after suffering a stroke and moving to Saint Simeon’s Senior Community, her spirit and her mind never stopped.

Mable’s outgoing personality and passion for inclusion and education made her one of the most popular residents. She made sure there were day-trips and art shows, and organized Saint Simeon’s first ever Juneteenth celebration, complete with African art displays, an all-male choir, horses, and food. In addition to all of the friends and family who visited Mable, she routinely hosted community leaders, elected officials, and other dignitaries who sought out her counsel, support, and wisdom. In 2014, Saint Simeon’s presented Mrs. Rogers-Rice with the Pioneer Spirit Award in celebration of her dedication to justice and equality. Mable received countless commendations including recognition from the Tulsa Urban League, NAACP, Omega Psi Phi Fraternity, American Red Cross, and The League of Women Voters. Her most recent awards include the Pinnacle Award, YMCA Women of Moxie, and most the Heather Burns Memorial Scholarship Fund Trailblazer Award.