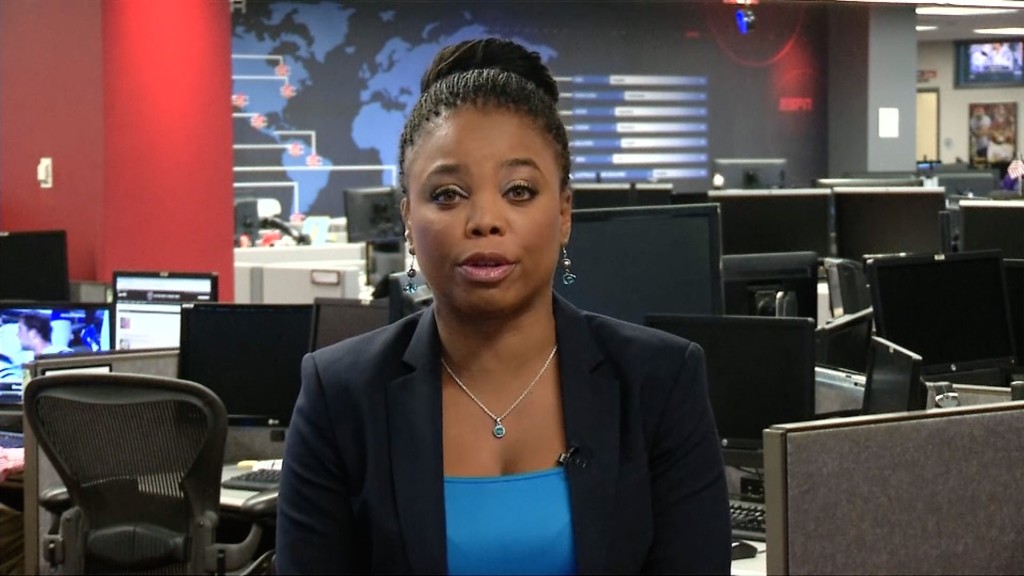 The ESPN anchor who called President Trump a “white supremacist” on Twitter last month is now calling for a boycott of advertisers aligned with “America’s Team.”

Jemele Hill, host of “SC6,” called on fans to take indirect action against the Dallas Cowboys after owner Jerry Jones told players they would be benched if they didn’t stand up during the national anthem.

“Change happens when advertisers are impacted,” Hill wrote. “If you strongly reject what Jerry Jones said, the key is his advertisers.”

“If you strongly reject what Jerry Jones said, the key is his advertisers.”

Jones issued his edict before the Cowboys’ game Sunday against the Green Bay Packers. It came amid a backlash against players “taking a knee” during the national anthem, driven in part by President Trump’s angry denouncement of what some players say is legitimate social protest.

Jerry Jones warned players to stand for the flag or sit on the bench.

“I know this, we cannot … in the NFL in any way give the implication that we tolerate disrespecting the flag,” Jones said. “We know that there is a serious debate in this country about those issues, but there is no question in my mind that the National Football League and the Dallas Cowboys are going to stand up for the flag. So we’re clear.”

Jones’ comments, the strongest made on the anthem controversy, came after he was asked about Vice President Mike Pence leaving the game in Indianapolis early after several San Francisco 49ers players took a knee during the national anthem. Hill, an outspoken liberal, tweeted that Jones “has created a problem for his players, specifically the black ones… If they don’t kneel, some will see them as sellouts.”

The ESPN host wrote, “By drawing a line in the sand, Jerry put his players under more scrutiny and threw them under the bus… If the rationale behind JJ’s stance is keeping the fanbase happy, make him see that he is underestimated how all of his fanbase feels.”

She urged “paying customers” to “boycott his advertisers” if they don’t agree with Jones’ comments. Hill quoted a list of Cowboys’ advertisers in one of her tweets, which included AT&T, Bank of America, Dr. Pepper Snapple Group, Ford Motors, MillerCoors and Pepsi, and sent a message to her 760,000-plus Twitter followers.

“Change happens when advertisers are impacted,” Hill wrote. “If you strongly reject what Jerry Jones said, the key is his advertisers.”

ESPN, the network that employs Hill, agreed to pay $15.2 billion in 2011 to air the NFL’s “Monday Night Football,” according to The New York Times. Although Hill got off with no formal suspension after calling Trump a “white supremacist,” it remains to be seen what the sports network might do now that she has gone after the most lucrative team in professional sports.

“The NFL is the biggest crutch keeping ESPN alive. If the NFL cuts ties, which would be reasonable if the network’s employees start calling for a boycott, ESPN would be in massive trouble,” Daily Caller’s David Hookstead wrote. “Not sure how happy ESPN management will be with an employee telling NFL fans to boycott NFL related sponsors, given the fact that ESPN needs the NFL to stay alive.”

ESPN and the Cowboys did not immediately respond to separate requests for comment. The NFL declined comment.

Fox Sports radio host Clay Travis has been an outspoken opponent of ESPN and brought attention to the hypocrisy that occurred when Hill called Trump a white supremacist. He has sent a series of tweets on Monday morning mocking Hill’s latest political outburst.

“ESPN’s entire future as business is tied to NFL. Without NFL company dies. And they have employees calling for advertiser boycotts. Amazing.”

“ESPN’s entire future as business is tied to NFL. Without NFL company dies. And they have employees calling for advertiser boycotts. Amazing,” Travis wrote.

Travis also wrote that Hill’s comments about the president and his supporters is “infinitely worse than Jerry Jones wanting players to stand for anthem,” and noted that the advertisers she wants fans to boycott also advertise on her show.

“Donald Trump is a white supremacist who has surrounded himself with other white supremacists,” Hill wrote on Sept 11. She called him “the most ignorant, offensive president of my lifetime.” Hill also called Trump a “bigot,” and “unqualified and unfit to be president.” She even added: “If he were not white, he never would have been elected.”

The tweets caught the attention of the White House and Press Secretary Sarah Sanders said she considers the rhetoric a “fireable offense.” Trump even took to Twitter to mock ESPN and demand an apology.

Hill eventually admitted that she cried in a meeting with ESPN President John Skipper over the situation.

“Since my tweets criticizing President Donald Trump exploded into a national story, the most difficult part for me has been watching ESPN become a punching bag and seeing a dumb narrative kept alive about the company’s political leanings,” Hill wrote.

“It was the first time I had ever cried in a meeting. I didn’t cry because Skipper was mean or rude to me. I cried because I felt I had let him and my colleagues down,” Hill wrote in a commentary on the ESPN site The Undefeated.

Hill said that “Twitter wasn’t the place to vent,” but went on essentially to double down on her initial comments about Trump, claiming they were about “right and wrong,” as opposed to politics.

Hill also said she probably needs “to take some classes about how to exercise better self-control on Twitter,” but that hasn’t stopped her from encouraging followers to boycott advertising of the Cowboys.

Jones and the rest of the Cowboys kneeled arm-in-arm before the national anthem before a game against the Arizona Cardinals two weeks ago, days after President Trump reignited the anthem-protest controversy with a series of tweets. Former 49ers quarterback Colin Kaepernick started kneeling during the Anthem last season in protest of what he believed were instances of racial injustice in the U.S. He is currently out of the league and many feel his political stance is why no team has given him an opportunity to play in 2017.

Disney CEO Bob Iger recently said Hill was not fired for calling Trump a “white supremacist” because he hasn’t experienced racism himself and understands that African-Americans are upset.

The NFL brought in $1.25 billion in sponsorship revenue last season, according to Yahoo.

Back in 2014, ESPN suspended Bill Simmons for criticizing NFL commissioner Roger Goodell. The following year his contract was not renewed by the network.

It will be interesting to see if the NFL and Jones have more power than Trump in the eyes of Iger and ESPN executives.