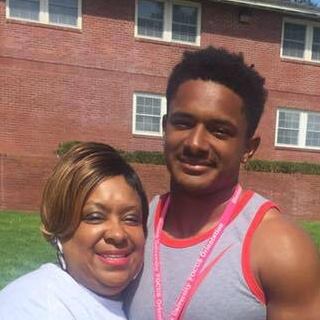 Michael Jordan did not show up at Lee Chapel Thursday night. But if he had, the person everyone came to honor would have done what came naturally.

“If Michael Jordan walked in that door right now, Nick would pick up a basketball and say, ‘OK, let’s go!’” Roger Hughes said.

He was Nick Blakely’s football coach until Monday night when Blakely felt dizzy at the Hatters’ practice. A couple of hours later, Blakely passed away. 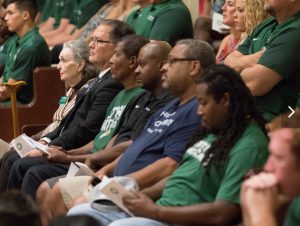 The medical reason hasn’t been determined. As to the bigger question of why life gets snatched from a 19-year-old, there is never a good explanation.

The best we can do is what Stetson did Thursday night. About 700 people filled the century-old chapel to remember a teammate, classmate and friend who was gone too soon.

“He was ultimate competitor,” Hughes said.

Whether it was playing cards or lifting weights or even shoveling snow with his brother, it seems Blakely could pull off a rare trick. The person he was trying to destroy would walk away feeling good about him. 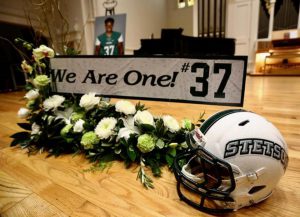 Looking at the large picture of Blakely that was displayed on stage, you could sense why.

“He is looking down on us and smiling with that beautiful smile,” Javian Henderson said. “That one-of-a-kind grin.”

They arrived on campus at the same time last year, two kids determined to make their marks. But after a couple of weeks of practice, they were still buried on the depth chart and looking at being red-shirted.

That had Henderson fighting back tears one afternoon.

“I was really questioning football,” he said. 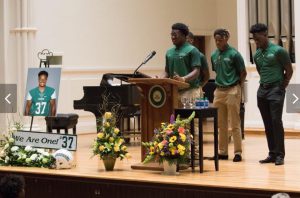 “Hey, Bro, it’s going to be OK,” Blakely said. “We’ll both be ready to play. They’re keeping us in their back pocket till next year.”

Blakely made the most of playing on the scout team against starters.

“We whupped them a lot,” Henderson said.

The ultimate competitor was also the ultimate trash-talker. He’d go in the weight room and challenge teammates to lift more than him.

“Then he’d stand around and make you prove it,” Hughes said. “He wanted to make you better.”

The coach couldn’t help noticing the scout-team linebacker at practice. Blakely would intercept a pass and return it with a little extra swagger.

Blakely was finally going to get on the field this Saturday. The Hatters open their season against Sacred Heart. All that waiting and weight-lifting and swagging was going to pay off.

Then came Monday. One minute he was being Nick Blakely, smiling and yapping and pushing teammates to succeed. An hour later, he was gone.

Hughes is a religious man, but he admitted he’s had a hard time seeing a lot of God in what happened.

Most of Blakely’s teammates aren’t much older, of course. They filled the first seven rows of the chapel, each with a No. 37 sticker on their green shirts.

Colin McGovern said the Hatters will compete like Blakely would have.

“That starts Saturday,” the quarterback said.

The service ended with “Amazing Grace,” and the players lined up to hug Blakely’s father and other relatives who’d made the trip from Lawrenceville, Ga.

Before leaving, Hughes had one last piece of advice. It was for God, who is now getting the Nick Treatment and being challenged to play a game of anything.

Win and be pestered for all eternity for a rematch. Or let Blakely win and put up with an eternity of trash-talk.

Hughes said God should go for the second option.

“You made him the ultimate competitor,” Hughes said.

Judging by the memorial service, that’s going to live on in a lot of people. 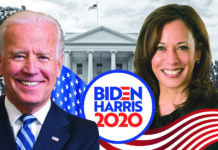