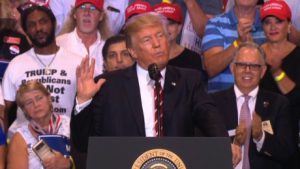 At a number of political rallies over the year, a character calling himself “Michael the Black Man” has appeared in the crowd directly behind Donald Trump, impossible to miss and possibly planted.He holds signs that scream “BLACKS FOR TRUMP” and wears a T-shirt proclaiming with equal conviction that “TRUMP & Republicans Are Not Racist.”Almost always, he plugs his wild website, Gods2.com, across his chest.

And so it was Tuesday night before a crowd of Trump supporters in Phoenix who had come to watch another show. There was the president, whipping up the wildly cheering crowd, and then there was Michael the Black Man, chanting just beyond Trump’s right shoulder in that trademark T-shirt.

The presence of Michael — variously known as Michael Symonette, Maurice Woodside and Mikael Israel — has inspired not only trending Twitter hashtags but a great deal of curiosity and Google searches. Internet sleuths find the man’s bizarre URL, a easily accessible gateway to his strange and checkered past.

The radical fringe activist from Miami once belonged to a violent black supremacist religious cult, and he runs a handful of amateur, unintelligible conspiracy websites. He has called Barack Obama “The Beast” and Hillary Clinton a Ku Klux Klan member. Oprah Winfrey, he says, is the devil.

Most curiously, in the 1990s, he was charged, then acquitted, with conspiracy to commit two murders.

President Trump gave a contentious speech at a campaign rally in Phoenix on Aug. 22, attacking the media, GOP senators and “obstructionist” Democrats. Here are the highlights.(Jenny Starrs/The Washington Post)

It’s unclear if the White House or President Trump’s campaign officials are aware of Michael the Black Man’s turbulent history or extreme political views, but he and his followers have stumped for the president at his inauguration and the Super Bowl.

In July, he posted video footage of himself at the Mar-a-Lago Club, Trump’s “Winter White House,” for the Republican Party of Palm Beach County’s annual Lincoln Day Dinner.

Wearing a black dinner coat over a white “BLACKS FOR TRUMP” T-shirt, Michael posed with the local GOP’s chairman, apparently took a photo of first lady Melania Trump and recorded a selfie video that showed his arm slung over the shoulder of Florida Gov. Rick Scott.

“I saw you on TV with Trump,” Scott can be heard telling Michael. “You did a good job.”

[As Trump ranted and rambled in Phoenix, his crowd slowly thinned]

At a campaign rally in late October 2016, down in Sanford, Fla., Trump even gave the “BLACKS FOR TRUMP” signs an approving shout-out.

“Look at those signs behind me,” Trump said to the roaring crowd. “Blacks for Trump. I like those signs.”

The candidate, wearing a camouflage “Make America Great Again” hat, turned to the sign-holders and offered a thumbs-up. Michael, standing behind Trump and grinning widely, gave a thumbs-up right back.

“Blacks for Trump,” the candidate said again. “You watch. You watch. Those signs are great, thank you.”

The signs drew national attention at the time, but not because of Michael. Rally watchers came away perplexed after one event when white women were seen waving the signs. That same month, New York Magazine and the Miami New Times published articles recounting the sign maker’s story.

Before he started calling himself Michael the Black Man, the man identified as Maurice Woodside. Around 1980, he joined a cult led by Hulon Mitchell Jr., who went by Yahweh Ben Yahweh and eventually turned violent, reported the New Times. The two men met when Woodside was 21 years old.

Woodside followed Yahweh’s fiery teachings for years, even after the leader allegedly denied his dying, cancer-stricken mother medical treatment and instead prescribed her “vegetables, nuts, and herbs,” prosecutors once said in court, according to the New Times.

In the early 1990s, the New Times reported, Woodside, Yahweh and 14 other members of the cult were arrested by federal agents and charged with racketeering and conspiracy in 14 murders and a firebombing, reported the New Times.

Ricardo Woodside, Maurice’s brother, had once been in the cult but left after his mother’s death. Woodside testified in court that his brother had helped beat a man named Aston Green, who argued with Yahweh and was taken to the Florida Everglades and beheaded with a dull machete, reported the New Times.

He also testified that Maurice Woodside was the cult member who stabbed a Louisiana man named Leonard Dupree in the eye with a sharpened stick.

Yahweh was sentenced to 11 years in prison. Maurice Woodside, who denies the cult was violent or murderous, was acquitted along with six others.

“You know why I wasn’t scared?” Woodside told the New Times in 2011, speaking of those charges. “Because Yahweh wasn’t scared!”

In later years, Woodside changed his name to Maurice Symonette. Eventually, he became Michael the Black Man, an anti-Democrat — or as he calls them, Demon-crat — who preaches the Bible and abhors homosexuality. He started a private radio station, BOSS 104.1 FM, to broadcast his radical beliefs, and began causing a ruckus in public.

At an Obama campaign speech in Coral Gables, Fla., in 2008, he and a group of other protesters loudly interrupted the future president, shouting “Barack, go home!” and waving signs that declared “Obama endorsed by the KKK,” reported the Miami New Times.

One sign, held by Michael the Black Man, read: “Blacks against Obama.”

His website, Gods2.com, proclaims on the landing page: “LATIN, BLACK AND WHITE MUST UNITE!”

Links on that site lead to another one, honestfact.com, which claims that the “Real KKK Slave Masters” are “CHEROKEE Indians (Hidden Babylonians).”

The proclamations only get more unhinged from there: “ISIS AND HILLARY RACE WAR PLOT TO KILL ALL BLACK & WHITE WOMAN OF AMERICA WITH MS-13.”

And: “YAHWEH BEN YAHWEH Taught Us To Vote Republican & is Now VINDICATED.”

The site also displays a photo of a Confederate flag with the caption: “Cherokee Democratic Flag.”

Under the name Maurice Symonette, Michael has posted many videos to YouTube. One, from February 2017, is titled “BLACKS FOR TRUMP calling Trump” and shows Michael giving a message to the president.

He told Trump he was proud of him for winning the election, saying he “conquered the Kingdom of Babylon and delivered everybody out of the sure hands of death.” Then he said he felt like his movement had been left behind in the wake of victory.

“Here we are, the lone Blacks for Trump,” he said in the video. “We’re the helpless. We just helped you by standing behind you.”