The clashes that broke out over the weekend at a white nationalist rally in Charlottesville, Va., have become a new touchstone in the nation’s long-running debate over racism, free speech and violence.

One woman was killed and many more injured when a car, allegedly driven by a rally participant, sped into a crowd of anti-racism protesters. Two state troopers monitoring the action died in a helicopter crash later in the day, though no foul play was suspected.

The event quickly took on enormous political importance as Democrats and Republicans alike denounced the violence and the white supremacist views espoused at the far-right rally. President Trump has also denounced the racist groups, but he suggests that anti-racism counter-demonstrators share some of the blame. On Tuesday, he said “both sides” were responsible for the bloodshed.

Here are several first-hand accounts of Saturday’s events in Charlottesville, collected from journalists, protesters and far-right ralliers who have published their accounts of what they saw that day.

Charlottesville Daily Progress photographer Ryan Kelly: “I hitched a ride with my editor downtown, and I started wandering the mall. There were groups on both sides scattered. There were a few small fights that broke out from time to time. People were throwing stuff at each other. A few people were beating on each other.”

BuzzFeed News reporter Blake Montgomery: “Most white supremacist and Nazi groups arrived armed like a paramilitary force — carrying shields, protective gear, rods and, yes, lots of guns, utilizing Virginia’s loose firearm laws. They used militarized defensive maneuvers, shouting commands at one another to ‘move forward’ or ‘retreat,’ and would form a line of shields or a phalanx — it’s like they watched ‘300’ a few times — to gain ground or shepherd someone through projectiles. It seemed that they had practiced for this.”

Hunter Wallace, a far-right blogger at Occidental Dissent: “The streets were not barricaded. Violent antifa [anti-fascists] were not penned in their own area as per our agreement with the Charlottesville Police Department, but were roaming the streets and blocking the entrance to Lee Park. They immediately launched an attack on our group with mace, pepper spray, bricks, sticks and foul liquids. The police stood idly by on the sidelines while a brawl was allowed to ensue. We had to fight our way into Lee Park and dozens of our people were injured by mace and pepper spray as we marched through the gauntlet.”

“Marcus Cicero,” another far-right blogger at Occidental Dissent: “Now, to begin Saturday’s rally, the League of the South assembled at an area only a few blocks from Lee Park – I myself was one of the shield men. As we advanced down the street toward the park, I immediately noticed a horde of Antifa, BLM terrorists, and other assorted genetic refuse ready and willing to block the street leading up to our destination.”

Matt Parrott of Traditionalist Youth Network, a white supremacist group: “With a full-throated rebel yell, the League broke through the wall of degenerates and TradWorker managed to enter the Lee Park venue itself while they were largely still reeling. Michael Tubbs, an especially imposing League organizer towered over and pushed through the antifa like a Tyrannosaurus among raptors as league fighters with shields put their training to work.”

Washington Post reporter Joe Heim: “Counter-protesters fought back, also swinging sticks, punching and spraying chemicals. Others threw balloons filled with paint or ink at the white nationalists. Everywhere, it seemed violence was exploding. The police did not move to break up the fights.” 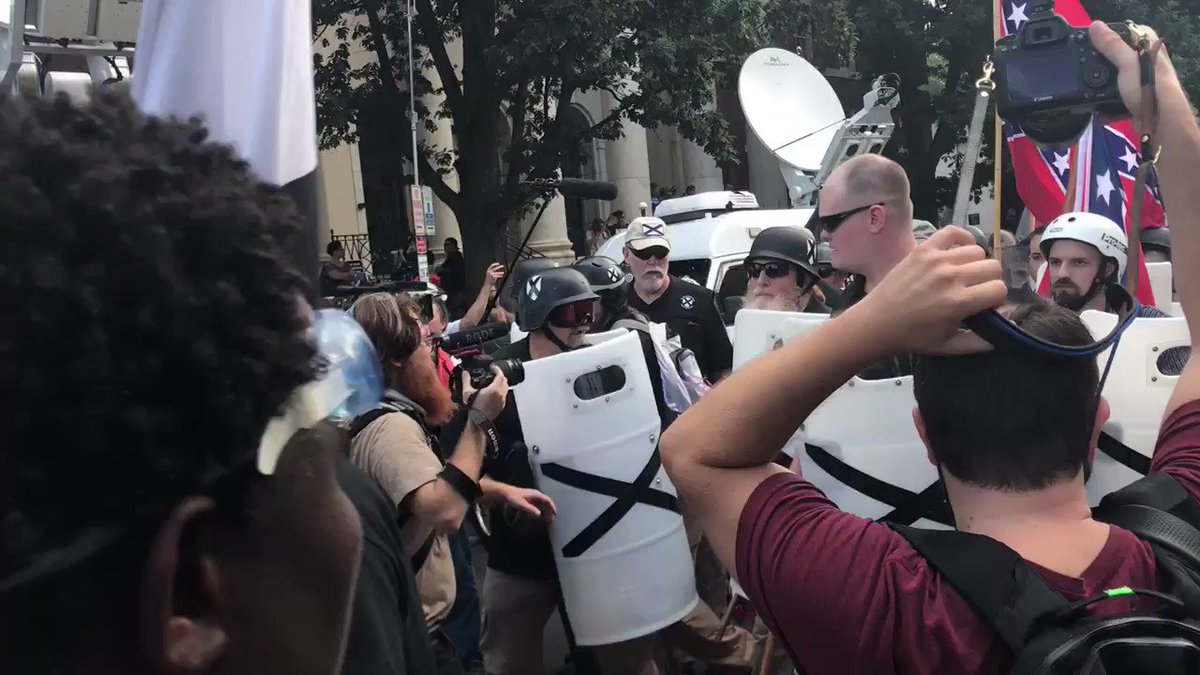 Unicorn Riot, a left-leaning news outlet that covers protests around the nation: 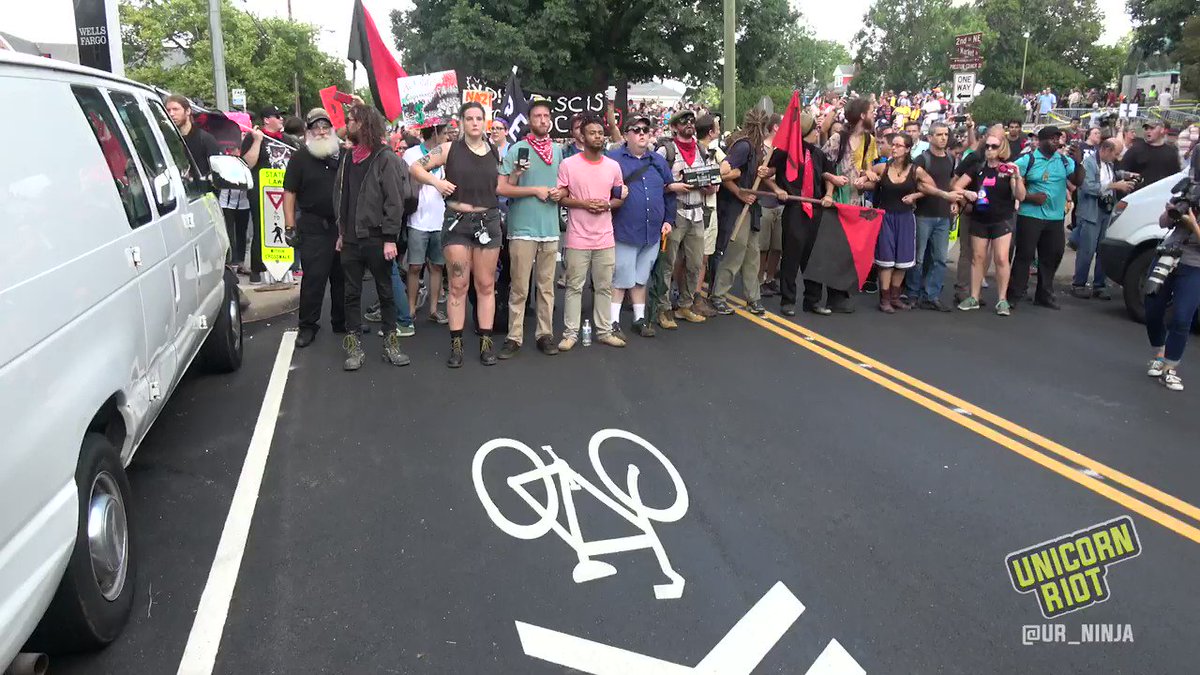 Trump just said antifa started fight on sat by “charging in swinging clubs” at racists. Video shows the opposite

Washington Post reporter Joe Heim: “Although Virginia State Police and Charlottesville police were stationed along the sides and the rear of Emancipation Park, the Market Street side was unattended. As it filled with rally-goers and counter-protesters, the mix quickly became volatile. The two sides screamed at each other. ‘[Expletive] … Nazis!’ the counter-protesters chanted. ‘[More expletives]’ was the response from the park where the rally-goers stood behind metal barricades.”

Jordan Green in the Nation, a leftist publication: “A phalanx of black-helmeted white supremacists — members of the Traditionalist Workers Party, Identity Evropa, American Vanguard, and other hate warriors — commanded the steps at the southeast corner of the park, repelling attempted incursions by Wobblies, communists, and a multiracial cast of irregulars eager to fight back. Water bottles and other projectiles flew in both directions, while police tear-gas canisters thudded into an adjacent parking lot, oftentimes lobbed back into the park by plucky leftists.”

Unicorn Riot: “Police then pushed the white supremacists out of Emancipation Park, and closed the park…. Unable to continue rallying in the park, the white supremacists took to the streets, where they were quickly followed and confronted by anti-racists. Several more extremely violent fights took place, with police looking on from their nearby substation.”

BuzzFeed News reporter Blake Montgomery: “The opposition was largely winging it, preferring to establish bases in other parks with water, coffee, food, first aid and comfort. Conflict would start much the same as it has at other alt-right rallies: two people, one from each side, screaming, goading each other into throwing the first punch.”

Redneck Revolt, an armed leftist group that brought rifles to Justice Park, one of the spots where anti-racist groups had gathered: “At many points during the day, groups of white supremacists approached Justice Park, but at each instance, Redneck Revolt members formed a unified skirmish line against them, and the white supremacists backed down. Most of the groups were not easily identified, but at separate points, contingents from Identity Evropa and the Proud Boys were recognized. The groups that threatened the park yelled racial and homophobic slurs.”

University of Virginia student Isabella Ciambotti: “I was on Market Street around 11:30 a.m. when a counter-protester ripped a newspaper stand off the sidewalk and threw it at alt-right protesters. I saw another man from the white supremacist crowd being chased and beaten. People were hitting him with their signs. A much older man, also with the alt-right group, got pushed to the ground in the commotion. Someone raised a stick over his head and beat the man with it, and that’s when I screamed and ran over with several other strangers to help him to his feet.”

Leftist anti-fascist organizers from Washington, D.C.: “Before the attack occurred, we chased the Nazis out of their park, removing their platform. They were on the move toward a community with many people of color. We mobilized to intercept. We were at our most powerful, all of us together chanting with enthusiastic support from the people of Charlottesville. That was the moment that we were attacked.”

Los Angeles Times account of the car attack by special correspondent Robert Armengol in Charlottesville: By early afternoon, hundreds of counter-protesters had amassed two blocks south of Emancipation Park, in downtown Charlottesville. They began marching down the middle of Water Street, near the city’s pedestrian mall. The white nationalists, for the time being, seemed to have dispersed. Some of the armed militia members had just driven away in vans and pickup trucks.

The crowd was jubilant. Demonstrators waved flags calling for solidarity and they chanted anti-racist slogans, declaring, “Whose streets? Our streets!” and “Black lives matter!” They hooted, played on drums and blew horns. One man dressed in a clown suit with rainbow-colored suspenders held aloft a poster that read, simply, “SHAME.”

A police helicopter flew overhead in the clear sky. It was about 2 p.m.

At East Fourth Street, the crowd veered left and headed back toward the Main Street mall, up a slight incline on a narrow one-lane road, flanked on either side by commercial buildings. The front of the march had advanced less than half a block before a gray sports car appeared, moving south toward the demonstrators.

The car and its driver, hidden behind tinted windows, advanced slowly at first. [Police have since identified the driver as James A. Fields, 20, of Ohio, who was previously seen marching with Vanguard America, a fascist group.] Then, just a few feet in front of protesters, the vehicle accelerated suddenly, plowing into at least a dozen people in a gut-wrenching crash, sending bodies, shoes and personal belongings flying through the air.

Victims cried out in pain while onlookers howled in shock and ran from the scene, yelling for medical help. “Oh my God,” someone screamed. “He mowed down everybody.”

Charlottesville Daily Progress photographer Ryan Kelly: “If that car had come through 20 seconds earlier, I would have been in the middle of the road, and I would have had my back to him. I wouldn’t have seen him coming at all. Honestly, I’m still processing that. It’s been such a crazy 24 hours that I haven’t been able to sit and absorb it. That was the first thing that went through my head a couple hours after I was done processing images. I was right where the car went, and I am very fortunate.”