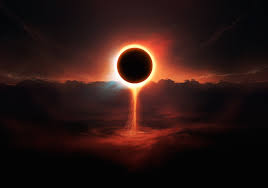 On Aug. 21, a solar eclipse will cut across the entire United States.

While most of the country will see a partial eclipse, in which the sun is only partially blocked by the moon, other areas will go into total darkness as the moon moves in between the sun and the Earth.

What will it look like where you are? How do you look at it? Can you take photos? Where do you get solar glasses?

Here’s what you need to know about the 2017 eclipse.

What is a solar eclipse?

A solar eclipse happens when the moon lines up between the Earth and the sun as the Earth revolves around the sun. The moon blocks the sun’s light from reaching the Earth.

Wait, doesn’t the moon move between the Earth and the sun every month?
Yes, but we don’t have solar eclipses every month because the moon’s orbit is tilted by about five degrees, with respect to the Earth’s orbit around the sun. It’s only when the Earth, the sun and the moon line up just right that you have an eclipse.

When is the solar eclipse?

The eclipse will happen on Aug, 21.

What time will the eclipse start?
The totality — more on that in a minute — will reach the West Coast of the United States – between the Oregon cities of Newport and Lincoln City – at 10:16 a.m. PT. That is 1:16 ET.
How long will it last?
The eclipse will end at 2:49 p.m. ET as the moon’s shadow moves off the Atlantic coast. That means it will take one hour and 33 minutes for the shadow of the moon to cross the country.
How fast will the shadow move?
According to eclipse2017.org, when the totality hits the Oregon coasts it will be moving at 2,955 mph. The shadow moves at different speeds across the country because of the curvature of the Earth. When totality makes it to Charleston, South Carolina, it will be going at 1,502 mph.

The path of the totality, in which the moon totally blocks out the sun’s rays, is only about 70 miles wide.
Those not in that 70-mile-wide strip across America will still see between a 20 percent to a 99 percent coverage of the sun by the moon.
What will happen during the eclipse?
Whether you are in the area of a partial eclipse or in the strip of totality, as the moon moves between the Earth and the sun, the sky will gradually begin to darken. If you are in the area of totality, the sky will grow dark as if it were nighttime, stars will appear and the temperature will drop.
No matter where you are when the moon starts to cover the sun, you will see something called Baily’s Beads, the jagged edge of the lunar surface illuminated by the backlighting sun. In a little while, the light from the sun will brighten and concentrate on one edge of the moon and create an effect that looks like a diamond ring.
Once the diamond ring disappears, the sun will be covered by the moon and you can safely look at it. But you’ll have to be careful not to look too long. The effect lasts only minutes before the process begins again, but in reverse – Bailey’s Beads, the diamond ring effect, then the sun again.
Do we know where the next total solar eclipse is going to be?
The next solar eclipse will be on July 2, 2019. The moon’s shadow will pass over an area from the southern Pacific Ocean to South America.
The next solar eclipse happening over the United States will be April 8, 2024.
Can you tell me what I will see no matter where I am on Aug. 21?
Yes. Check out the NASA interactive map that allows you to see the exact time the eclipse will begin and end and the level of coverage of the sun for any spot in the world.

Can I still plan a trip to the areas that will see the sun totally blocked out?
Yes, but you better hurry. Everyone in the country will be able to experience the eclipse, even though only a small section of the country will be pitched into total darkness. If you want the full experience, it’s not too late to make plans to travel to a point along the path of 100 percent totality. While some have had hotel rooms booked for years, the American Astronomical Society offers this link to tours and travel opportunities.
What about the weather?
There is nothing you can do about the weather. If there are clouds in your area it will be tougher to see the eclipse, obviously. Check out the National Oceanic and Atmospheric Administration chart on where it is typically cloudy on August 21 to see if it is likely to be overcast where you are. 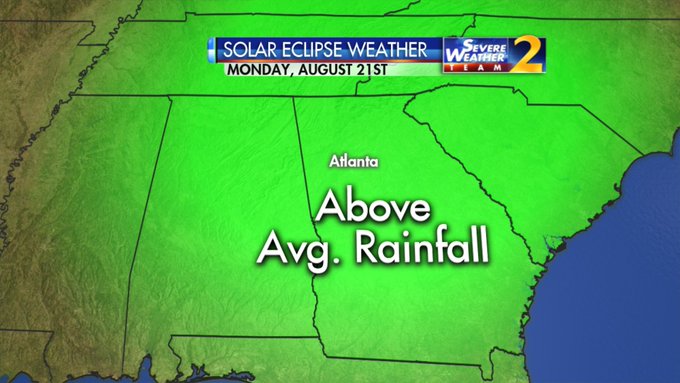 It is EARLY, and it’s only a TREND, but right now… outlook is for above average rainfall around #Eclipse day. 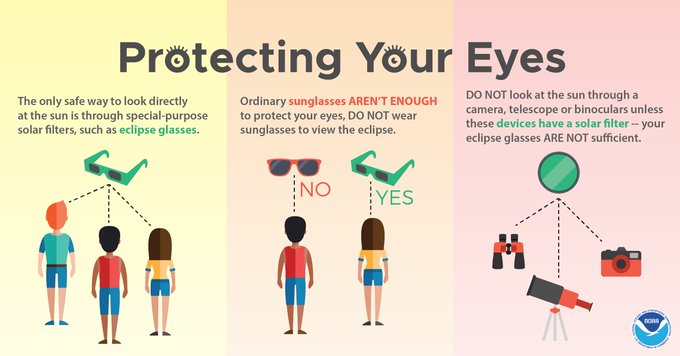 Know BEFORE You Go:

Sunglasses are NOT enough eye protection for a solar eclipse. #Eclipse2017 #ProtectYourEyes http://www.weather.gov/eclipse

Here’s what NASA says about looking at the eclipse:
“When watching a partial eclipse you must wear eclipse glasses at all times if you want to face the sun, or use an alternate indirect method. This also applies during a total eclipse up until the time when the sun is completely and totally blocked.
During the short time when the moon completely obscures the sun – known as the period of totality – it is safe to look directly at the star, but it’s crucial that you know when to take off and put back on your glasses.”
Where can I get eclipse glasses?
The American Astronomical Society offers this list of Reputable Vendors of Solar Filters & Viewers.
Note: Make sure you get glasses that are safe for directly viewing the sun. They should indicate they are compliant with ISO 12312-2. The IOS logo will be on the glasses or on the box they come in. According to the AAS, “alarming reports of potentially unsafe eclipse viewers (are) flooding the market.”
Again, refer to the AAS list (above).
What about a live stream?
NASA will be hosting an “Eclipse Megacast” on Aug. 21 that will last about four hours. Check it out here, or on Ustream or YouTube.
You can also watch the eclipse on the Time and Date website starting at 11:30 a.m. ET for footage from various locations.
Newsweek has a list of the other places you can watch it via livestream.
NASA is also offering “Eyes on the 2017 Eclipse!,” an “interactive, 3-D simulation” of the eclipse.
Can I photograph the eclipse with my smartphone or camera?
Yes, you can, but check out this video for some tips.