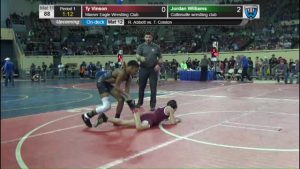 Jordan has also since been ranked the #1 Junior High Wrestler in the Country going into the 2017-2018 season.