When the man who was about to end the life of Spencer Tillman’s mother entered her hospital room on January 23, 2002, the thirty people who were crammed around her bedside fell silent. All that could be heard was the rhythmic wheezing of the respirator as it kept what was left of LaRue Helen Tillman alive. Mother, wife, missionary, friend of rich and poor alike, now there was nothing left of her but an empty vessel, a shell.

The road leading up to this point had been long and difficult. For years, Spencer and his siblings had stood alongside their mother as she fought against diabetes which had systematically cut her down. Nine years earlier, the disease had taken one of her legs. A few years later, they amputated her second leg. Then the disease attacked her kidneys, and she was forced to go on dialysis. In June 2001, she had a stroke. Seven months later, she had a massive heart attack. A second one struck the following day, leaving only twenty percent of her heart operative. Twenty-four hours later, it was all but over.

Get the latest Flash Player to see this player.

After confirming the family’s wishes one last time, the man in the white uniform put his hand on the ventilator tube and pulled it out of Mrs. Tillman’s mouth. Her reaction was immediate. Her eyes opened wide and she let out a cough.

“Even though everyone knew her response was merely an involuntary reaction, a final gasp from a dying body, they could not help but hope for a final miracle,” says Spencer.

After that brief spark of life, however, Mrs. Tillman lapsed back into her former comatose state. A few minutes later, she was gone.

For Spencer, his mother’s death represented far more than the loss of a parent. For him, it marked the beginning of an identity crisis.

“I could not escape some nagging questions about my life. Here I was, a former NFL player who had been the captain of a Super Bowl team; a successful sports broadcaster for CBS – one of a few African American men to reach such a level – a businessman jetting around the country making deals; and a husband and father of four beautiful girls. I had a good life, a great life in comparison to most. And yet, something was missing, something right at the core of my being.”

Similar thoughts plagued Spencer for the next two months. Then one morning as he was meditating and praying in his office, Spencer felt an impulse to go for a walk. Having no idea where he was headed or why, he got up and went outside. Little did he realize where this walk would lead, both physically and spiritually. Over the next several hours, Spencer covered a distance of twenty-six miles. In his heart and spirit, however, he traveled even farther.

Midway into his marathon, Spencer began to sense God speaking to him. Specifically, he began to understand what had caused that gaping hole he felt at the core of his being. When he was young, Spencer had always put God first in his life. But he realized the more successful he became, the less he relied on God, to the point where lately, he had been pretty much relying on himself. Sure, he still gave lip service to God, but when the chips came down, Spencer’s number one source of wisdom and guidance was still himself. That thought was extremely troubling, because Spencer was all too aware of a particular verse from Proverbs:

“My path was not leading to death – at least not yet. However, it was quickly racking up an abundance of anxiety, fear, and uncertainty,” says Spencer.

Spencer likened his life to the story of Mary and Joseph when they left Jesus behind at the temple when he was just a young boy. They were a couple of days into their journey home before they even realized he was missing. After rushing back to Jerusalem, they were relieved to find him in the temple talking to the teachers of the law. As Spencer reflected on that story, he wondered where he had left Jesus behind. More importantly, how would he find him again?

That question was answered a short time later as Spencer came across a train stopped on the railway tracks blocking his path. As Spencer chatted with the engineer, he suddenly began to feel what he refers to as a “spiritual download” from God. For virtually everything the engineer told him about the train, God began to show Spencer a parallel in the spiritual world.

“For example, the engineer explained that even though the train only traveled short distances – keeping within the state of Texas – it still had two fuel tanks with a total 5,000 gallon capacity, one on either side, that were kept full at all times,” says Spencer.

“On these tanks, the engineer said the train could travel from coast to coast without refuelling. So why keep them full on such short hauls? The weight of the fuel was needed to keep the wheels from slipping. Steel wheels on steel rails do not make for good traction. Thus, the heavier the load; the greater the traction. I began to sense a life principle hidden somewhere here….”

The engineer went on to demonstrate how he could increase traction even further on an uphill grade or during icy conditions by pressing a button and spraying sand onto the rails through a pneumatic hose. Once again, Spencer saw an analogy, this time for prayer as a way to increase our ability to get a grip when we feel the wheels of life beginning to slip.

Finally, realizing the reason God had prompted him to go on this marathon walk, Spencer thanked the engineer and then quickly turned toward home, his mind reeling with new ideas.

“When I entered our house, I went straight into my home office. For the next few hours, I poured over my Bible, the Internet and any other source of information that would help me flesh out the ideas churning in my mind. Everything was coming to me in real time: Ideas for a book, for an interactive CD, for speaking engagements, you name it.” 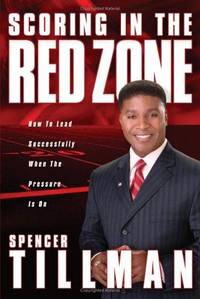 Throughout all of this, God was making one thing abundantly clear: He was calling Spencer to be a leader.

“Having been a leader all my life, that should have been a ‘no-brainer.’ However, God also insisted that business as usual would no longer cut it. I had to do things his way. No more being Mr. Dealmaker and flying all over the place. God wanted me to spend time with Him learning what He had called and equipped me to do; not what I had called and equipped myself to do.”

Spencer also sensed that this call to leadership was not for him alone. He was to share it with his family, his peers and with the world at large. He felt a special burden for other African-Americans. Due to God’s grace, Spencer had managed to rise to a level in his career that few African-Americans had achieved. Thus, he felt a duty to be an example to those who would follow him, to make the most of all he had been given.

Throughout all of this excitement, Spencer was searching for a biblical model for what God was telling him, someone who exemplified the attributes God had been speaking about.

“As I prayed about it, God revealed the name ‘Nehemiah,’ one of the so-called ‘minor prophets’ of the Old Testament. Having never really studied Nehemiah’s life, I turned to my Bible and read about his drive to rebuild Jerusalem and her people after they returned from captivity in Babylon and Persia. It was a tremendous story of perseverance, obedience and leadership. I knew I had found my man.”

At the end of the day, Spencer sat back in his chair and shook his head in wonder. Little did he realize when he woke up that morning all that God had prepared for him that day. He had started out dissatisfied with my life, worrying about the future and unable to see a way out of his circumstances. But God had lifted Spencer out of his chair, transported him twenty-six miles through town, and then brought him home with a fully realized vision of what he wanted Spencer to direct his energies toward for the foreseeable future.

Scoring in the red zone

It was a remarkable day, a day which is still bearing much fruit, most recently in Spencer’s book, Scoring In the Red Zone: How to Lead Successfully Under Pressure. Inside, readers will find a richly detailed description of the leadership concepts and principles God taught Spencer that day and throughout his life, even though he did not realize he was employing them at the time. But Spencer notes that you will also find something more:

“The testimony of two men – Spencer Tillman and Nehemiah, both of whom have striven to expend their lives in service of God and his people. I pray that both testimonies will inspire you to become the leader God has called you to be as well.”

Does it feel like you’ve been leaning too much on your own understanding sometimes? Perhaps it’s time you asked Jesus to reveal the path you should walk. If you don’t know Jesus, we encourage you to pray the following prayer:

Lord Jesus, I want to know You personally. Thank You for dying on the cross for my sins. I open the door of my life and receive You as my Savior and Lord. Thank You for forgiving my sins and giving me eternal life. Take control of my life. Make me be the person You want me to be. Amen.

He has also served for four years as a reporter for the Network’s NCAA tournament coverage and is an anchor for regional broadcasts on Fox Sports Net. He also served as host of “NFL Sunday Ticket.”

After being drafted by the Houston Oilers in 1987, Tillman worked as an anchor and reporter at KPRC-TV during the seven-month off-season. He played for the Oilers for two seasons (1987-88) before being traded to the San Francisco 49ers for three seasons (1989-91). He served as the 49ers captain in 1990. In 1992, he was traded back to Houston, where he completed his playing career (1992-94). His football and broadcasting careers developed in tandem as he hosted two radio sports-talk shows and was a reporter and anchor for a radio PM magazine in Oklahoma City prior to his television jobs.

Tillman was an All-America running back for Oklahoma University (1982-86) and was the captain of the 1985 National Championship team when it defeated Penn State, 25-10, in the Orange Bowl.

He received several awards during his playing career, including UPI Player of the Year in the Big Eight Conference in 1982, Big Eight Football Newcomer of the Year in 1983 and MVP of the 1987 Orange Bowl. He placed fifth in the Heisman Trophy voting in 1983.