NEW YORK (UPI) — One type of drug commonly used to treat hypertension, angiotensin-converting-enzyme, or ACE, inhibitors, was shown in a new study to be associated with significantly worse health outcomes in black patients than white patients, though researchers are unsure why.

Previous studies had suggested the drugs were less effective for black patients, however researchers said black people have been underrepresented in many of those studies despite hypertension being more common than in other racial and ethnic groups.

The results of the new study, conducted by researchers at New York University, follow the January recommendation from the Joint National Committee that black patients with hypertension be treated with drugs other than ACE inhibitors.

“We know what works in clinical trials,” said Dr. Gbenga Ogedegbe, a professor in the department of population health at the NYU School of Medicine, in a press release. “But when you go into the real world clinical practice setting, physicians don’t often translate that evidence into practice. This is the first study that looks at this issue in a real-world, clinical practice setting.”

Researchers analyzed records for 59,316 new users of ACE inhibitors collected by the New York City’s Health and Hospital Corporation between 2004 and 2009. The HHC operates all public hospitals and clinics in the city, and about 35 percent of its patients are African American.

Researchers said that while there is no explanation yet for the difference in efficacy, the results of the data review mimic the previous, racially biased studies.

“The results of this study adds to a growing consensus among physicians that treatment of hypertension in blacks should not be initiated with ACE inhibitors,” Ogedegbe said.

The study is published in the Journal of the American College of Cardiology. 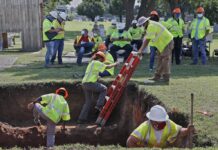