Triana Browne was crowned Miss Oklahoma 2017 at the Mabee Center in Tulsa on over the weekend. She graduated from Oklahoma State University in 2016 where she was a track star. Brown entered this year’s Miss Oklahoma pageant as Miss Oklahoma City.

“It’s an unbelievable feeling, because last year I wasn’t even a finalist in anything,” Browne said. “To be able to come back and work extremely hard and then to win is just an overwhelming feeling.” 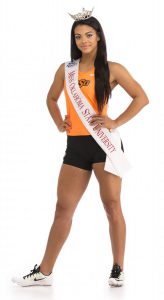 Triana Browne was born Jan. 4, 1993 in Tulsa. She is the daughter of Dr. Monica Browne and Joel Hearrell. Both of her parents ran track for Oklahoma State, with her mother competing in the 100, 200 and 400 meter distances, and her father running in the 800 and 1,500 meters and in cross country. 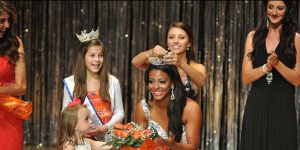 Following in her parents’ footsteps, Triana attended Starr’s Mill High School in Fayetteville, Ga., where she was a four-year track and field letter winner, and played volleyball. Triana was a member of the Dean’s Honor Roll and President of the H.E.R.D.E.S. club that raised money for children with AIDS. Triana also assisted in the coordination of winter and summer Special Olympics for the region, and was a competitor for the 2009 Miss Georgia Outstanding Teen.

Triana was the 2016 Miss Oklahoma State Pageant winner.  Her platform for that pageant was “Heart to Heart”, which stems from her passion to promote healthy living.

Triana stated, “I intend to have a heart-to-heart discussion with children, teens and my peers on the importance of developing life-long healthy eating habits while becoming and staying physically active,” said Browne. “I will also encourage the entire family unit to become involved in healthier eating and active lifestyles”.