Tulsans can be proud of Etan Thomas. The Booker T. Washington Alumnus has become one of the most vocal social rights representatives of this era.

Thomas is more than an athlete, he’s redefined himself “The Activist Athlete.” Thomas defies the stereotype of the apolitical athlete, planting his roots in his formidable literary career, passion for mentoring and civic engagement.

Born in Harlem, New York and raised in Tulsa, Oklahoma, Thomas’ childhood was surrounded by books on the civil rights movement, politics and the 1960′s. He was greatly influenced by his mother, Deborah Thomas, a schoolteacher, who instilled in her two sons to think critically and use their platform to make a difference. Etan Thomas has made his mark far beyond the boundaries of his 11 years in the NBA.

In 2005, Thomas released his first book, a collection of poems called More Than An Athlete (Haymarket Books) that set Thomas apart as “this generation’s athlete with a moral conscious and a voice.” In 2012, Thomas released his 2nd book, Fatherhood: Rising To The Ultimate Challenge (Penguin), as a national conversation about fatherhood ensued and The Fatherhood Movement was born. Thomas continues this conversation holding Town Hall panels throughout the country at prisons, churches, Universities, schools, and various conventions where he continues to inspire, motivate and support generations. In January 2013, he released Voices Of The Future (Penguin), a collection of poems and essays from young writers from around the country on topics such as Racism, Trayvon Martin, President Obama, Gun Violence, and Aids. Thomas utilizes poetry as an expressive form and encourages young people to read, write and develop the skills to express themselves.

His writings have appeared in The Washington Post, Huffington Post, CNN, ESPN, Hoopshype.com and slamonline. He frequently can be seen on MSNBC as a special correspondent for “hot topics.” He continues to be invited on syndicated radio and co-hosts a weekly local radio show on WPFW 89.3FM, The Collision, where sports and politics collide. 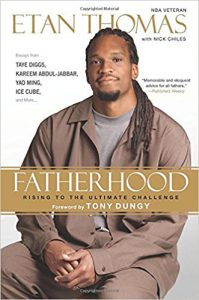 Etan Thomas book “Fatherhood: Rising to the Ultimate Challenge” can be purchased from this link at: www.barnesandnoble.com