Seeking a fourth national title, OU will try to close out the best-of-three series Tuesday night. First pitch is scheduled for 7 p.m. on ESPN.

“Epic, epic battle,” said Oklahoma head coach Patty Gasso after the game. “I don’t know what else — that was it. This is one of the greatest games I think in College World Series history, I would guess.”

Oklahoma was also involved in the previous record for longest WCWS Championship Series game, its 12-inning contest vs. Tennessee in Game One in 2013. Monday’s game was the third longest in program history, surpassed only by a 20-inning game against Texas Woman’s University (4/8/79) and a 19-inning contest vs. Oklahoma State (4/20/83). OU lost both those games, however, making Monday’s game the longest win in the OU record book.

Oklahoma registered its 60th win Monday night, reaching the 60-win plateau for just the second time in program history (66 in 2000).

Junior Paige Lowary started (for the first time since April 28 at Texas Tech) and finished it, while fellow junior Paige Parker threw 6.2 innings of relief after taking over for Lowary to start the sixth. Lowary, now 16-3, threw a career-high 10.1 innings, the most since Keilani Ricketts tossed 10.2 innings in April of 2011. Lowary finished with seven strikeouts and two runs allowed on eight hits and a walk. Parker struck out seven, as well, and allowed three runs on four hits with three walks.

Knighten was the hero offensively Monday night, breaking a 4-4 tie in the top of the 17th inning with a towering three-run home run to left field. It was her 11th of the season and third WCWS home run of her young career.

Knighten’s bomb came off Florida’s Kelly Barnhill, the USA Softball Player of the Year. Barnhill started the game and was replaced by Delanie Gourley to start the eighth before returning again in the 16th. Barnhill allowed five runs after allowing just nine on the entire season entering the game. 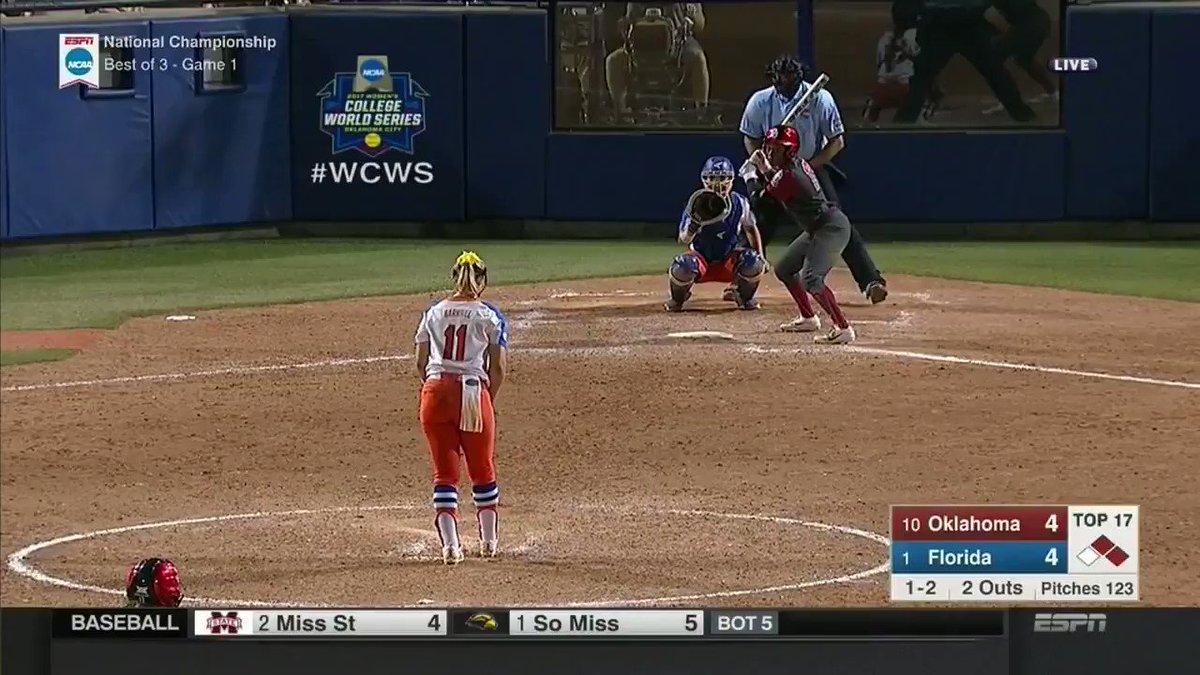 After twice rallying to prolong the game, the Gators looked like they may do it a third time in the bottom of the 17th, but they could only muster one run before Lowary finished the game with the 40th combined strikeout between the two teams.

Neither team could score over the first four extra innings, but that all changed in the top of the 12th.

It started with Knighten when she lined an 0-2 pitch down the left field line for a leadoff double. On the very next pitch, Aviu pulled the offering from relief pitcher Delanie Gourley into the right field stands for her fifth home run of the season and the first postseason home run in her career.

Florida wouldn’t go down without a fight again as the Gators tied it in the bottom of the inning.

Jordan Roberts drew a leadoff walk and was replaced by pinch runner Lily Mann, while Sophia Reynoso followed with a single into right field. Parker battled back and got a popped up bunt and strikeout for two outs. Lowary re-entered the game and got ahead 0-2 against leadoff hitter Amanda Lorenz, but two pitches later Lorenz doubled to left-center to plate Reynoso and Mann to even it up at 4-4.

After 3.5 scoreless innings to open the game, Florida finally broke the 0-0 draw in the bottom of the fourth.

With one out, Nicole DeWitt doubled into right field and Aleshia Ocasio put the Gators on top with an RBI single back up the middle.

The lead would not last long, though, as the Sooners quickly tied the game up in their next trip to the plate.

In the top of the fifth, junior Nicole Pendley laced a double into the gap in right-center with one out. Romero batted next and drove a 1-1 pitch back up the middle to bring home Pendley with the first earned run allowed by the Gators in the World Series.

Oklahoma then pulled in front in the top of the sixth when Mendes launched a solo home run to right field on a 1-2 pitch. It was her sixth home run of the season.

The Sooners were one pitch away from capturing the game but the Gators rallied in the bottom of the seventh.

Janell Wheaton drew a leadoff walk against Parker, but a putout at second base brought the first out. Pinch hitter Brooke Clemens then popped out to junior Kelsey Arnold at shortstop for the second out of the inning. Sophia Reynoso batted next and fisted a full-count pitch into left center that landed safely despite the diving efforts of Pendley in center field and senior Macey Hatfield in left. Ocasio, who had reached on the fielder’s choice earlier in the frame, came home from second with the tying run.