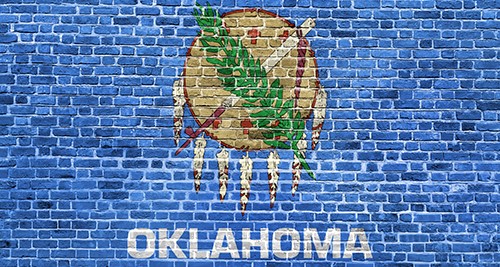 After months of wrangling, legislative leaders finally introduced budget bills late on the last Tuesday of legislative session, just three days before the deadline to adjourn. This budget appropriates $6.86 billion for FY 2018 — almost the same amount as FY 2017 after mid-year cuts and supplemental appropriations. But compared to the budget of eight years ago, this budget is more than 15 percent less when adjusted for inflation, a decrease of about $1.25 billion.
Even as they worked to rush this budget through before adjournment, state leaders did not describe it in glowing terms. House Appropriations and Budget chair Leslie Osborne provided a blunt assessment when presenting the budget Tuesday evening: “These are horrible funding levels. We are massively underfunded in state government.” Governor Fallin said that “This plan keeps our government from shutting down… unfortunately it leaves many agencies facing cuts for the sixth year in a row.”
Lawmakers developed the budget knowing they had about $800 million less revenue for FY 2018. The burning question all session was how to raise additional revenues to fill the budget hole and avoid devastating cuts to services. Efforts to reach an agreement between Republicans and Democrats on tax increases that could clear the 3/4ths supermajority hurdle of State Question 640 fell apart in the final week. This led Republican leaders to move ahead with only revenue measures that they claim do not fall under the legal definition of a “revenue bill” and thus could be approved with a simple majority.
The budget provides flat funding or small increases to about twenty agencies. However, even the relatively protected agencies may be forced to cut services and programs.
For example, common education was given a $22 million increase to cover increased employee health care costs, but state aid funding will remain $180 million below 2009 even as the student population has increased by 50,000 students — the deepest cuts in per pupil state aid funding in the nation. And despite the legislators’ promise to provide teachers their first pay raise in 11 years, they again failed to get that done.
The Department of Veteran’s Affairs took a cut of less than 1 percent, but that will provide little chance of increasing staffing at veterans care facilities where staffing shortages have contributed to neglect and deaths of patients.  The Department has seen its state funding cut by over 20 percent since 2009.
Meanwhile, most agencies are facing cuts of just under 5 percent compared to last year. In most cases, the cuts are stacked onto deep cuts from previous years. Higher education will have its appropriations cut over 25 percent since 2009. The result will be program and staff cuts, and no doubt further tuition increases will be on the table.
Other agencies have been hit even worse: the Health Department is now down 29 percent from 2009, the Agriculture Department is down 33 percent, the Department of Environmental Quality is down 41 percent, and the Oklahoma Arts Council is down 46 percent.

Some lawmakers will claim that this budget was the best they could do given the size of the budget hole. But in fact, many reasonable revenue options were left on the table, including raising the gross production tax rate on new production, rescinding some of the income tax cuts of recent years, ending the capital gains deduction, and many others. Oklahomans deserve better than a budget announced at the 11th hour that once again fails the families and communities of this state.
David Blatt is Executive Director of Oklahoma Policy Institute (www.okpolicy.org).

Editors note: Shamelessly, the Oklahoma Legislature is imposing a cigarette tax, a car tax and relying on gambling revenue to finance the state government. The big oil companies are being allowed to exploit our natural resources without paying their fair share. Woefully our leadership won’t stand up and halt this corporate welfare which is ruining our State.