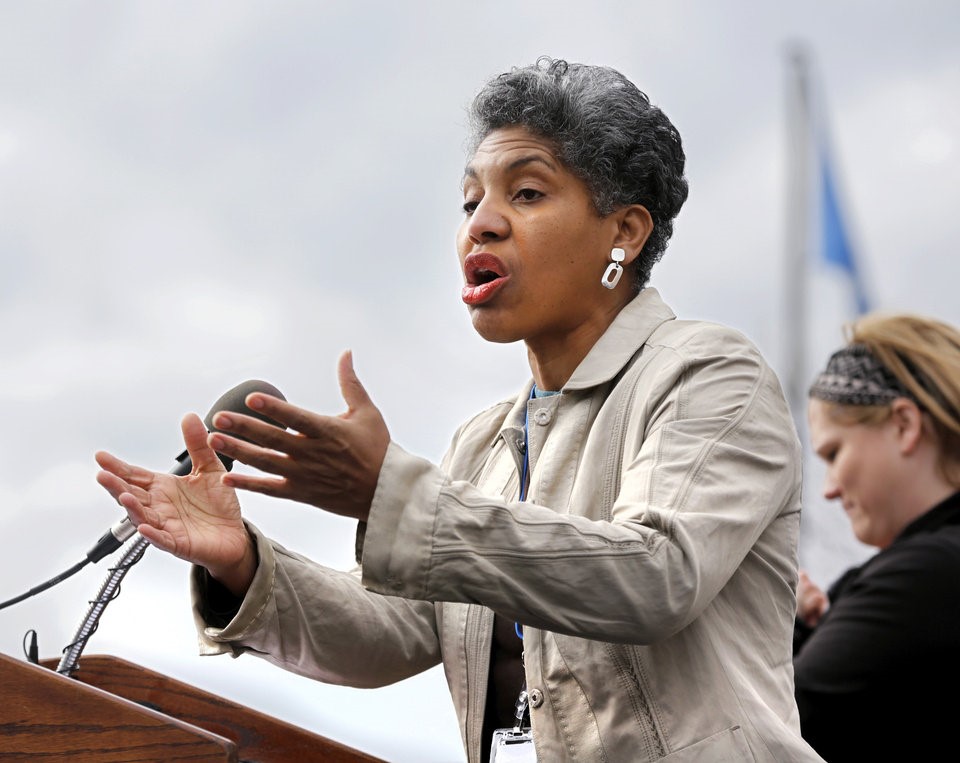 On Tuesday afternoon, May 16, 2017, in a last-ditch effort to fund state government, Gov. Mary Fallin and Republican leadership held a press conference to announce a budget agreement had been reached.

The problem is there was no such agreement.

The Republican leadership went on to say that if the budget bill failed to pass out of the House, Democrats would be to blame.

During the question and answer session of the press conference, Rep. Regina Goodwin, from Tulsa, called out the Republican leadership contending “what your plan is going to do is zero right now…”

Later, House Minority Leader Rep. Scott Inman said Democrats were not at the table for the agreement.

The Republican revenue plan included an increase to the cigarette tax, an increase to the gasoline tax and would allow new oil and gas wells to keep their gross production tax rate at 2 percent for 18 months instead of 36 months.

“We know that will bring in $500 million. What your plan is going to do is zero right now, maybe at most, $23 million two years down the road.”

Inman claimed that the Republican plan would end up raising taxes on the middle class while giving the illusion of increasing taxes on the oil and gas industry. Inman said no one in the Democratic caucus would vote to raise the tax on gasoline and diesel fuel because it’s a burden on middle-class families.

“We’re not in this mess because cigarettes are too cheap or because gas prices are too cheap,” said Inman, D-Del City. “The way you solve the problem is not to raise $400 million on the backs of middle-class families and allow the wealthiest industry in the history of the planet to not add one new dollar to the bottom line.”

If there was no agreement, why did the Governor call a press conference? Was it just Republican posturing, or worse, pandering to the voters?

The Republican leadership is fully aware that while Republicans control both the House and the Senate, Oklahoma’s Constitution requires a supermajority, a three-forth vote, for tax increases. Without at least a handful of Democratic votes, any revenue raising measure is doomed to fail.

Nevertheless, after the press conference the Republican leadership attempted to push the revenue bill through the House. As was predictable, it was soundly defeated by a vote of 51-46.  Twenty-one Republicans and all 26 House Democrats voted against the revenue measure.

The Republican attempt to stampede a $345 million tax bill through the House came up far short of the 76 votes required for passage.

However, since the bill got at least 51 votes, it can be reassigned as a ballot measure. We doubt the Oklahoma voters will be duped into approving such a measure if it is put on a ballot.

By law, the legislator must submit a balanced budget to the Governor for her approval by the end of this month. Inman, Goodwin and the other 23 Democrats in the House are steadfastly holding their ground that there will be no tax increases on the working people unless the rich pay their fair share. If necessary, the Democrats are prepared to go into special session until their mission is accomplished.

We ask then why is the Republican leadership willing to watch the state sink into chaos rather than raise taxes on rich oil companies and ask smokers and drivers to pay a bigger portion of their costs to the state?

We applaud freshman Rep. Goodwin’s true grit in standing up against the forces that are doing their best to destroy the quality of a good life for Oklahomans.