Betty Jo Shelby a white police officer has left a mark on Tulsa, Okla., that will scar this city for generations to come.  A jury which was twenty percent African American found her not guilty of first degree manslaughter of Terence Crutcher, even though both police dash cam and police helicopter video that showed Crutcher’s hands up in the air. 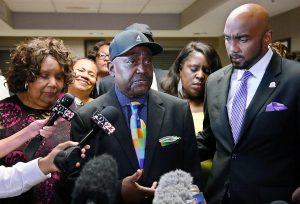 “Let it be known that I believe in my heart that Betty Shelby got away with murder,” Crutcher’s father, the Rev. Joey Crutcher, said after the verdict was announced.

The defense portrayed Betty Jo Shelby as a fearful white woman defending herself against a “big bad dude” in the trial.

In their closing arguments, prosecutors noted that the other officers around her knew it was a “bad shoot” after she killed the unarmed man. The verdict was handed down after more than nine hours of deliberation.

Across the country, people and organizations are looking at this verdict and noting that this city and community is still operating in a segregated state of mind’ highly visible, without regard for the generations to come.

Today’s youth are being taught about inclusion and diversity, but are watching racism and social injustice manifest before their very eyes.

Following the verdict, a group of people of all races protesting the jury verdict and avoiding conflict of letting Shelby walk free, approached the front door of the Mayo Hotel to demand the officer come out. The protesters were thought Shelby was inside.

Mayor G.T. Bynum issued a statement after the verdict which stated: “After considering days of testimony and undergoing its own deliberation, the jury has spoken. I appreciate the jurors’ service to our community and respect their verdict. But this verdict does not alter the course on which we are adamantly set. It does not change our recognition of the racial disparities that have afflicted Tulsa historically. It does not change our work to institute community policing measures that empower citizens to work side by side with police officers in making our community safer. And no one has been calling for the resources to implement community policing more actively over a longer period of time than the men and women of our Tulsa Police Department. So, we are moving forward together – Tulsans from all parts of the city, police officers and everyday citizens – with a unified purpose to make this a better place for all of us.”