Reverend Al Sharpton is back in Tulsa for the beginning of the Terence Crutcher/Betty Shelby murder trial. Sharpton, who was in Tulsa 11 days after Officer Betty Shelby shot and killed Terence Crutcher on Sept. 16, 2016, held a March for Justice which was nearly a mile-long.

Many people thought the presence of Sharpton would agitate the Tulsa north community but it was totally different, “For me, it was surprising,” says Richard Baxter, founder of RacismStinks. “I thought he was like a real agitator and I thought he was going to stir up a lot of feelings that were not going to end up in a positive way.”

Sharpton speaking to a standing room only crowd on Wednesday, May 10, 2017, at the Oklahoma Jazz Hall of Fame stated that, “First of all, I was told that someone on the internet said we were coming here to start trouble, like shooting an unarmed man with his hands up is not trouble. We are not here to start trouble, we are here to stop trouble.” Sharpton also stated, “It seems arrogant to me that you have the feel like you have the right to take peoples’ life, what kind of humanity do you have to act like someone else’s life is so worthless that you file charges against the prosecutor for trying this case. Tulsa, you need to be in the courtroom, you need to show up at the courthouse every day, take a half day off if you can, we need hundreds of people to show up and tell them ‘I’m here, I have a court date, I’m here my name is Crutcher.’ Your elected officials from all causes need to work together because that could have been any one of us on that highway that night.” 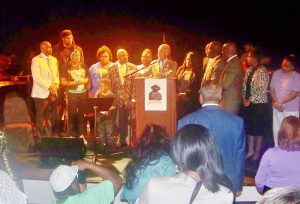 Sharpton further stated, “In closing, the reason the movements of the 50s and 60s made such powerful movements is because it was done from a spiritual base. You are not going to fight the powers that be unless you have the strength of a higher power. We wrestle not against the flesh and blood, but principalities and wickedness in high places.”

Native Tulsan and former NBA standout Etan Thomas, who hosts a radio show entitled “Athletes and Activism” was also a part of the panel at the Oklahoma Jazz Hall of Fame. Thomas interviewed Tiffany Crutcher (twin sister of Terence Crutcher) for his book, “We Matter: Athletes and Activism.”

Thomas stated, “Tiffany’s strength and courage is absolutely incredible. I want to send this message to the people of Tulsa because the Crutcher family need their support this week. They need all of Tulsa north to show up and make sure the powers that be in Tulsa know that we are not happy with the overall culture of the police department, and that specific changes need to be made moving forward that will benefit everyone.

This is the first time in Tulsa’s history that a police officer has actually been indicted, but what comes from this case has the potential to shift the way they TPD (Tulsa Police Department) police for years to come.”

The Betty Shelby trial will test the inner core of the heartbeat of the city of Tulsa, while many feel that this is a total social injustice, and it is a waste of tax payer’s monies to try something so obvious. Others feel that Shelby was right in discharging her revolver thus murdering Terence Crutcher. The jury alone will make the final decisions as opinions and theories will continue to surface for years to come.

Tulsa, Okla., has yet to truly heal from the 1921 Race Riot 96 years ago, and this trial may once again test the progresses of diversity and inclusion made in this city. As America looks to Tulsa, hopefully, we can gather ourselves as a unified city and survive this moment because it can, as the race riot did, affect us for generations to come.