Jury selection began Monday in Shelby’s trial for first-degree manslaughter after she shot and killed Terence Crutcher in September 2016. Crutcher was unarmed at the time of the shooting.

Shelby pleaded not guilty to the charges.

Leading up to the trial, defense attorneys and prosecutors have debated whether or not various pieces of evidence will be allowed in court, such as the full video of the shooting and Crutcher’s use of PCP and his criminal history.

Local attorney Guy Fortney says picking a jury won’t be easy because most people have already seen the video of the shooting. 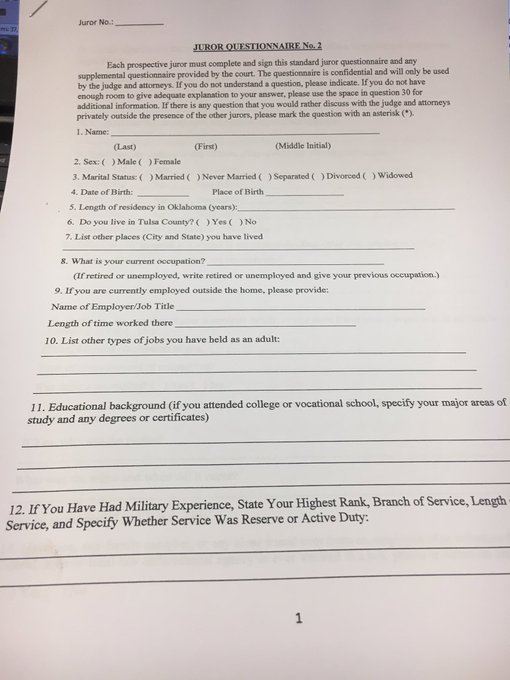 70 jurors were empaneled. All of them took two questionnaires. @KTULNews

RELATED | Is Tulsa ready for the attention brought on by Officer Betty Shelby’s manslaughter trial?

“You go into any coffee shop around Tulsa and ask if they’ve got an opinion about the Betty Shelby shooting, and you’re going to get opinions about it, because they’ve all seen the video,” Fortney said.

The Tulsa Fraternal Order of Police announced last week that it would be filing an ethics complaint against Tulsa County District Attorney Steve Kunzweiler, who charged Shelby with manslaughter less than a week after the shooting.

Jerad Lindsey, chairman of the Board FOP Lodge 93, issued a statement Monday morning about Shelby’s trial:

“Today, Officer Betty Jo Shelby will go on trial for doing her job. The District Attorney charged her before the investigation was even completed. Police officers face dangers every single day. That pressure shouldn’t intensify because of concern about public opinion and activist prosecutors. Our officers stand by Officer Betty Jo Shelby and we hope that we can move past this political trial quickly so that every Tulsan can refocus on keeping our city safe and making it a great place to live and work.”

The District Attorney’s Office and the Crutcher family will not be commenting Monday.