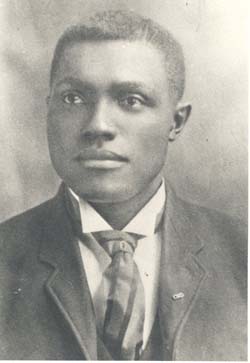 Tulsans Julius Pegues And Eddie L. Evans Among Those Honored

The Oklahoma Legislative Black Caucus (OLBC) held its 21st Biennial A.C. Hamlin Banquet Tuesday night, May 2, 2017 at the National Cowboy & Western Heritage Museum in Oklahoma City.  This banquet is in honor of Albert Comstock Hamlin, the first African American elected to the Oklahoma State legislature (1908) who was the only African American to serve until 1964. The event was star studded with men and women from the political and legal community and appeared to be sold out.

Matthews served as chair for the past two scholarship banquets and passed the gavel to Rep. Young who will be coordinating the next banquet.

Albert Comstock Hamlin was born in 1881 in Topeka, Kansas to former slaves and moved with his family to Oklahoma Territory in 1890. He married Katie Weaver in 1899 and they had five children.

Hamlin was elected to the State legislature as a Republican in 1908 and represented the third district of the predominantly African American Logan County.

Hamlin authored the bill that established Taft School for the deaf, blind, and orphaned children. He also sponsored successful legislation that would make facilities truly equal for both white and black railroad passengers and an amended bill to prevent certain activities such as theatrical performances and baseball games on Sundays.

While Hamlin served, the legislature passed laws designed to limit the voting rights of African Americans. Hamlin did not support the bill.

Hamlin lost a bid for reelection in 1910 after a constitutional amendment limited African American voters by creating voter registration requirements including literacy and registration of individuals or their ancestors prior to January 1, 1866. Known as the “grandfather clause,” the amendment was declared unconstitutional by the 1915 Guinn v. United States case.

The “grandfather clause” was responsible for an exodus of African Americans from Oklahoma to Canada.

In This case, the United States Supreme Court deemed the grandfather clause unconstitutional and stated that Oklahoma’s grandfather clause was “repugnant to the prohibitions of the Fifteenth Amendment” and that Oklahoma must remove its clause. In practice, however, the Supreme Court’s verdict had no impact on black suffrage. Oklahoma like other states affected by the ruling quickly enacted new policy to sidestep Guinn. In Oklahoma, legislators passed a statute which extended the vote only to those who did vote or were eligible to vote prior to Guinn. Black voting remained suppressed in many Southern states until the civil rights campaigns of the 1960s.

The new law directly resulted in Hamlin not being reelected in 1910. Hamlin died in 1912 at the youthful age of 31, of unknown causes.

The OLBC presented two checks to Langston University (LU) for $10,000 each, which were accepted by Kent J. Smith, Jr., president of the university. Kent assumed the presidency on June 4, 2012.

LU reported a 45 percent increase in first time freshmen enrollment in 2013. That was one of the largest classes in the 116-year history of the institution. LU is Oklahoma’s only HBCU (Historically Black College and University).