The New England Patriots are taking issue with a New York Times photo comparison that suggested a significantly smaller turnout for their Super Bowl celebration at the White House with President Donald Trump than one two years ago with then-President Barack Obama.

The Times on Wednesday used an Associated Press photo of the Patriots standing behind Obama on the south side of the White House in 2015. Stairs on either side of the main group were filled with people. The tweet compared it with a Times photo taken Wednesday showing both staircases empty. 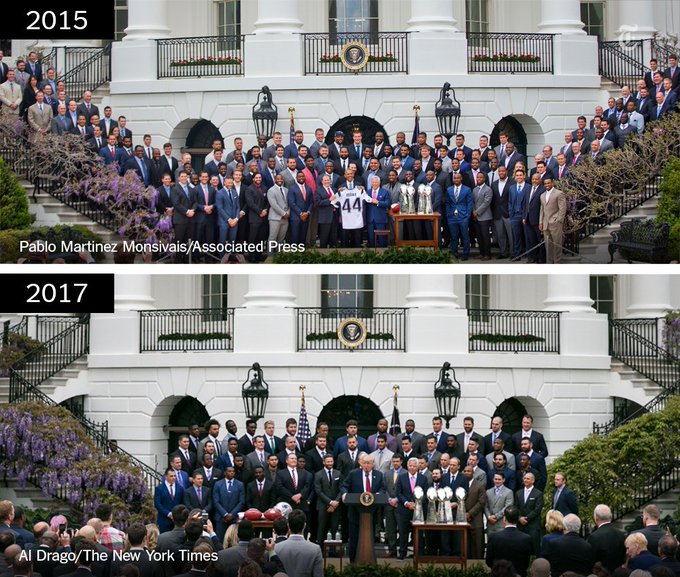 The Patriots responded on Twitter that the photos lack context, saying football staff sat on the South Lawn instead of standing on the stairs this year.

Tom Brady didn’t make the trip for family reasons but 34 other players were on hand as the Patriots were honored at the White House for their Super Bowl championship.

The Times tweeted an update saying the Pats told them fewer players attended this year but that the total delegation was about the same. The photo comparison was also used in a story on the Times’ website before being removed with a correction.

In all, 34 players were present for the Wednesday afternoon ceremony on the South Lawn, a total similar to the team’s past visits in 2004 and 2005 but noticeably fewer than in 2002 and 2015. Tom Brady was among the players not in attendance, with the quarterback saying he didn’t attend for “personal family matters.”

Trump, who has had an acrimonious relationship with the Times over his coverage during the presidential campaign and in the first year of his presidency, took the opportunity to blast the newspaper for a “big lie.”

Failing @nytimes, which has been calling me wrong for two years, just got caught in a big lie concerning New England Patriots visit to W.H.

Information from ESPN’s Mike Reiss and The Associated Press contributed to this report.