Donald Trump met Monday at the White House with the leaders of a number of historically black colleges and universities. Secretary of Education Betsy DeVos commemorated the meeting with one of the more bonkers statements you will ever see a 21st century politician make, somehow twisting an attempt to bring up her pet issue of school choice into praise for the segregated higher education system of the Jim Crow South: 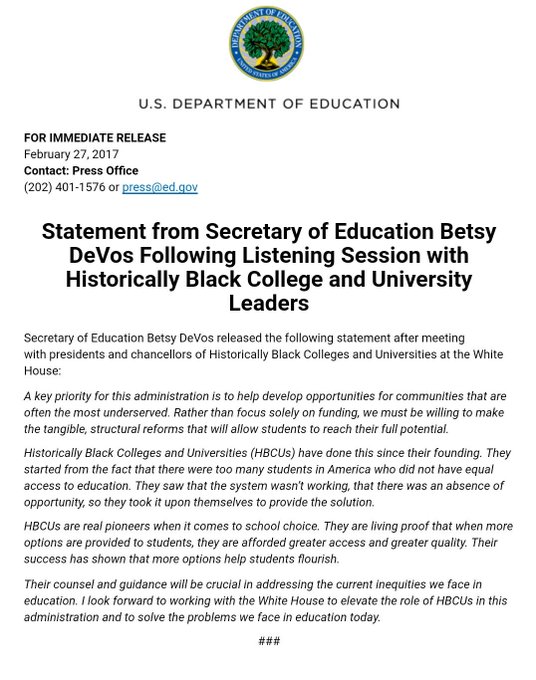 First of all, it sounds like a seventh-grader wrote this, which is perhaps what happens when you put someone who has never really had a real job in charge of the Department of Education. Second, this official 2017 federal government press release celebrates legal segregation (!!!) on the grounds that the Jim Crow education system gave black students “more options,” as if there was a robust competition between HBCUs and white universities for their patronage. (When black Mississippian James Meredith chose the “option” of enrolling at the University of Mississippi in 1962, a massive white mob formed on the campus; two people were shot to death and hundreds injured in the ensuing battle/riot, during which federal marshals came under heavy gunfire, requiring the ultimate intervention of 20,000 U.S. soldiers and thousands more National Guardsmen.)

DeVos is delivering the keynote address Tuesday at an HBCU event at the Library of Congress. Should be interesting.