Currently, an A-F grading system is being used to evaluate schools. However, the Oklahoma Department of Education has offered changes to the current system’s formula. Some of those changes have come under fire due to the new formula’s use of race.

“This hearing was a chance to bring teachers, lawmakers, administrators and education scholars into the same room to discuss and voice concerns over the recommended changes to the public school evaluation system,” said Goodwin, D-Tulsa. “There are many people from my district and throughout Oklahoma that don’t believe there should be separate markers for black kids and white kids.”

Outside of the racial aspects of the changes, many at the hearing were concerned about the perception that some schools would be given a higher grade without actually showing improvement.

The Oklahoma State Dept. of Education (OSDE) wears the mask. Deeply disturbing, Dr. Marianne Perie, Director, Center for Assessment and Research Design, who helped devise this plan spoke in the hearing of designated racial student groups and academic targets, “Each group will have its own target.” Separate, but equal, we say, not now, not ever. All students must be measured against the academic standards, not to each other or separate targets. The A-F school report card already had numerous critics, now this new funny math formula covers up educational flaws. In efforts to fulfill mandates set by the federal Every Student Succeeds Act and House Bill 3218, OSDE has approved a plan, headed for consideration by the Oklahoma State Legislature and governor. Missing from this report, are proven plans, resources and tools to aid administrators and teachers. OSDE reps reported teachers have stated, “Why even try” when faced with the gap between low student performance and academic standards.  While the newly approved OSDE plan now measures growth across the full spectrum of performance, the Oklahoma Accountability Report states it will “deter percent-correct thinking”.  Traditionally, an “A” was 90 percent -100 percent, will the general public know the A-F 20 point spread “fix” is in? A new scoring and point system has been formulated:

The report reads, “This rubric is intentionally weighted towards grades B, C, and D and reserving grades A-F for the best and worst schools.” With this formula, schools’ grades rise while students are not meeting academic standards.

Education consultants like Dr. S.M.B. Miller say the state also should consider different factors, including the education level of a student’s parents and if the student is living in a single-female-parent home. Miller stated, “They have set different curves based on demographics characteristics. And that is a slippery slope. Particularly when all of the students regardless of those same characteristics have to get the same score on the exam, everyone has the same target score.”

“This manipulative formula purposely elevates schools whose students are not meeting academic standards,” Goodwin said. “Underfunding and lowering expectations are not the way forward. Instead, we must provide the resources and tools necessary to support our students, teachers and administrators.” See Editorial page 4 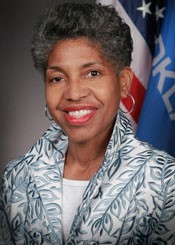