The PNE connects football players with best-in-class mentors that nurture and coach athletes towards career success when the cheering stops.”

– Guy Troupe, PNE Founder and Chairman of the Board 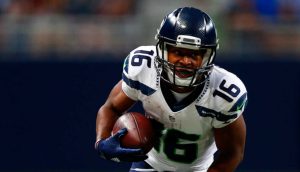 Tyler Lockett has a reputation to uphold.  He is the son and nephew of professional football players. Lockett followed in his dad and uncle’s footsteps to play at Kansas State University where he earned All American honors. His dad, Kevin Lockett, is a tough act to follow having played seven NFL seasons as a wide receiver for the Chiefs, Redskins, Jaguars and Jets. Tyler was drafted in the third round of the 2015 draft as the 69th overall pick. It didn’t take him long to make a favorable impression scoring a touchdown on a kickoff return in his first preseason game and a punt return in his first regular season NFL game.  He put in the work and was rewarded as an All Pro after his first season with the Seattle Seahawks.

His football pedigree is evidenced by his production but most would have counted the undersized Lockett out. He, however, will always be in the game. Competing in all phases of life because of his grit and faith. Lockett, a devout Christian, is as squeaky clean as they come. He’s honest, pure and well-rounded. He’s inspirational, entrepreneurial, and a member of the PNE network.  His most recent venture, TL, is a clothing line of tee-shirts, hoodies and hats for men and women. He’s not just selling clothes. He’s selling beliefs. Fear Can’t Come, Don’t Stop, I Create and Silence the Critics are four slogans you can rock from his 2016 line.

Tyler has passions outside of the game. Check him out performing spoken word–and follow him on–Twitter @tdlockett12. You’ll be glad you did!