It was a bravura performance — reminiscent of her best tennis earlier in her career — and Saturday’s final will also be a flashback, because her opponent will be her younger sister Serena Williams.

Venus Williams, the enduring 36-year-old star, was the more consistent, even-tempered and opportunistic player in her 6-7 (3), 6-2, 6-3 victory. She converted 5 of 9 break points against the big-serving Vandeweghe while Vandeweghe could convert just one of 13.

Serena Williams said she did not watch her sister’s match but was well aware of the result before she walked on court.

“She’s my toughest opponent,” said Serena Williams, who holds a 16-11 edge in their rivalry. “No one has ever beaten me as much as Venus has. She has a pretty good record against me, and we have a good record against each other. I just feel like, no matter what happens, we’ve won. She’s been through a lot, and I’ve been through a lot. And to see her come back and do so well is great.”

“I look forward to it,” she said of the final. “A Williams is going to win the tournament.”

All-Williams finals in major tournaments were once a tennis staple, but this will be the first since Wimbledon in 2009 when Serena Williams defeated Venus Williams in what was also Venus’s most recent Grand Slam singles final appearance.

It was the first Grand Slam semifinal in singles for Vandeweghe and the 21st for Williams, who reached her first and won her first nearly 20 years ago at the 1997 United States Open.

Vandeweghe was 5 years old at the time and she grew up — like every other young tennis player of her era — watching the Williams sisters regularly contest major trophies.

But Vandeweghe, despite her lack of experience at this level, did not look cowed by the moment, breaking Williams in an intense opening game that lasted six minutes.

She did, however, get broken back immediately. From there, the servers took control. It was a strong first set, one in which neither player had a clear edge in pace, but Vandeweghe began to truly find her range on her own service games after the midway point.

She carried that momentum into the tiebreaker, which she broke open at 2-2 by winning four straight points. It was the first set Williams had lost in the tournament. 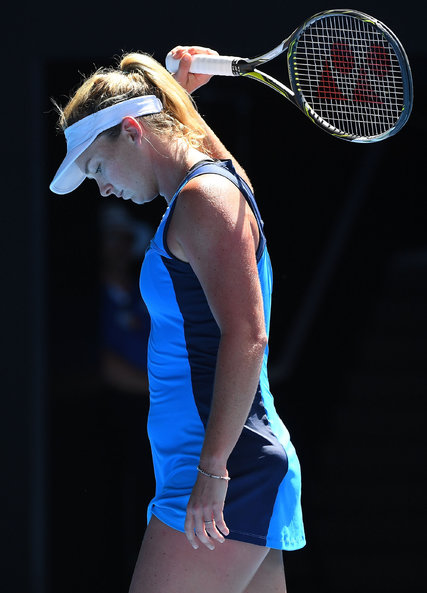 Vandeweghe was playing in her first Grand Slam semifinal. It was Williams’s 21st.CreditQuinn Rooney/Getty Images

But Williams showed no outward signs of frustration, well aware of how precious this opportunity remained, and her experience and inner drive shone through in the second set while Vandeweghe, a volatile player in the past, began to drop hints of some turmoil within.

Broken in the third game after making three straight errors, Vandeweghe flicked her racket onto the court, and her frustration would increase as she failed repeatedly to convert on break points.

Vandeweghe — born in New York City but a longtime resident of San Diego — comes from a family of top-level athletes. Her grandfather Ernie and uncle Kiki both played in the N.B.A. Her mother, Tauna, was an Olympic swimmer.

She grew up with N.B.A. players like Bill Walton dropping by the house, heard her grandfather tell stories about the celebrated U.C.L.A. basketball coach John Wooden and has long been exposed to top-level tennis coaching as well. She now works with Craig Kardon, who once coached Martina Navratilova when she won her ninth and final Wimbledon singles title in 1990.

“It sounds so conceited to say, but I’ve been around superstars my whole life,” Vandeweghe said in an interview this week. “So to have a coach that is a top coach in his own craft isn’t like a ‘whoa’ sort of thing. It’s more like, O.K., I’m getting the best information that I can.”

The best information Kardon has given her is that she needs to manage her emotions and manage risk, too. And after losing seven of her last 10 tour-level matches, she hardly arrived in Melbourne on a roll but managed to work her way into a much more intimidating place.

She upset Angelique Kerber, the No. 1 seed and defending champion, in the fourth round and then overpowered Garbiñe Muguruza, the big-hitting Spaniard who is the reigning French Open champion.

She won both those matches in straight sets but Williams proved a greater challenge.