Residents in the community say the past fifteen years have been like a roller coaster. It started in 2002 when Albertson’s began work on a store at Pine and Peoria. That store opened in 2005, but it was not open long, the company decided to leave the Tulsa area in the summer of 2007. The location sat abandoned for about three years until Gateway opened in the winter of 2010. It closed its doors in the summer of 2014 to re-open with a third of a store a few months later. Now there is another reason to be optimistic.

On Monday, January 9, 2017, City Councilor Vanessa Hall-Harper, State Representative Regina Goodwin, Tulsa Economic Development Corporation Executive Director Rose Washington and others, including members of the Tulsa Health Department and Greenwood Chamber of Commerce and others met with a group of veterans who own and operate Save-A-Lot food stores in Kansas, South Carolina and West Tulsa. According to Hall-Harper their stores are “…really nice and stocked with affordable, good quality and name brand food. It is clearly not the Save-A-Lot we know of on Lewis and Pine. I was shocked as I toured both stores…”

It’s An Oasis Not A Mirage

The west Tulsa Save-A-Lot is owned by Honor Capital, a veteran-led, for-profit company based in Tulsa, aims to build and operate small grocery stores in “food deserts,” areas without a local grocery store within a few miles.

The store will have freshly cut meat and fresh produce, along with packaged foods.

Honor Capital opened its latest Save-A-Lot store in Wichita, Kan., last week and Hall-Harper and Washington came away impressed with the store.

Goodwin, Hall-Harper and Washington believe that one of the biggest obstacles in their path is confronting residents’ perception of the current Save-A-Lot store in Tulsa north, which is under different ownership.

Goodwin said for the store to be a success, it will need buy in from residents who might be skeptical because of the brand’s current reputation. “The community will be the deciding factor.”

Harper-Hall quotes Shirley Chisolm as a reminder that it can be done: “You don’t make progress by standing on the sidelines, whimpering and complaining. You make progress by implementing ideas.”

Hall-Harper is planning a bus tour so the community can visit the West Tulsa store. Hall-Harper invites the community to visit her Facebook page (Vote 4 Vanessa) to see additional pictures and videos of the store. 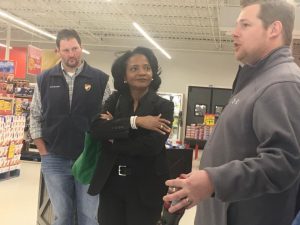 Councilor Vanessa Hall-Harper at the Save-A-Lot in West Tulsa with owners who want to bring a new Save-A-Lot to Tulsa North. (Contributed photo) 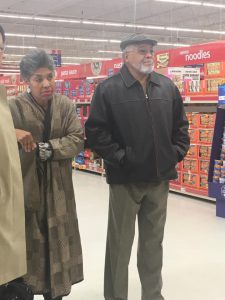 State Representative Regina Goodwin and Mike Reed were in attendance on Monday at the west Tulsa Save-A-Lot. (Contributed photo)