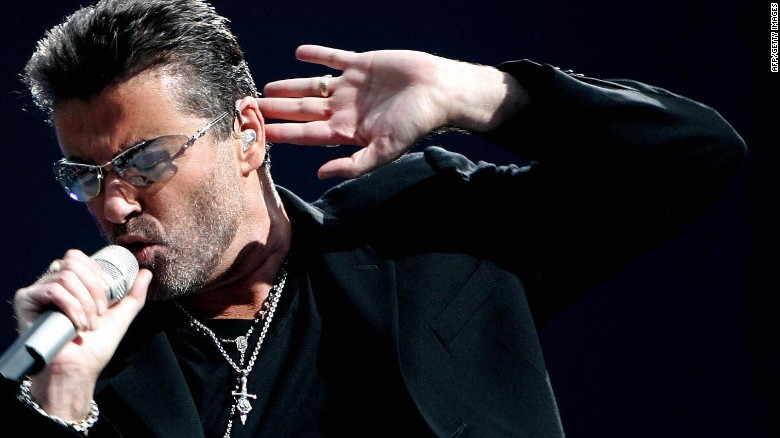 George Michael, one of pop’s reigning stars in the 1980’s and ’90s, and an English songwriter and founding member of the duo Wham!, was found dead Sunday at his home in England.  He was 53.

A police statement said: “Thames Valley Police were called to a property in Goring-on-Thames on Christmas Day.  A 53-year-old man was confirmed deceased at the scene.  At this stage the death is being treated as unexplained but not suspicious.”

Selling tens of millions of albums, both with Wham! and on his own, Mr. Michael achieved success but grew uncomfortable with the superficiality of his 1980s-style pop stardom.  He was a writer – penning ballads, like “Careless Whisper” and “Father Figure”, and dance hits like “Freedom ’90” – and he served as his own producer and studio backup band.   One of his first hits, “Wake Me Up Before You Go-Go”, introduced us to his handsome, pop-idol image, but Mr. Michael evolved into a grown-up sex symbol  with his 1988 release of  “Faith” which won a Grammy for Album of the Year.  That same year, he won a Grammy for “I Knew You Were Waiting (For Me),” a duet with Aretha Franklin.

Mr. Michael was heavily influenced from R&B – old and new – and his title track from “Faith” hinted at rockabilly and gospel.  He had three number one hits from “Faith” which sold more than 10 million copies in the United States alone.

While he never reached this level of success again, Mr. Michael still enjoyed performing.  He performed with Paul McCartney at the 2005 Live 8 benefit, and toured with new music in 2006 which included duets with Mr. McCartney and Mary J. Blige.  He toured with an orchestra in 2010-11, performing standards and some of his own music.  During this tour, he collapsed with pneumonia which nearly cost him his life.

Many celebrities have taken to social media to express their feelings on losing Mr. Michael:

“Farewell My Friend! Another Great Artist Leaves us”, tweeted Madonna.

Paul McCartney wrote on his website,”Having worked with him on a number of occasions, his great talent always shone through and his self deprecating sense of humour made the experience even more pleasurable.

Singer Elton John wrote on Instagram: “I have lost a beloved friend – the kindest, most generous soul and a brilliant artist.”

“I don’t have it in me anymore to write about our greats.  I just knew one day I’d get to work with #GeorgeMichael.  Sad Christmas.”  – Questlove Gomez (@quetlove) on Twitter.